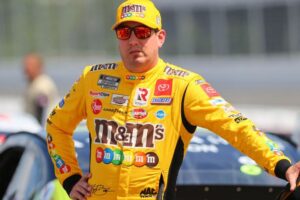 It was such a Kyle Busch response to winning a race and answering a question about it by suggesting it shouldn’t even exist — but that’s more or less what happened on Sunday after he emerged victorious in the Explore the Pocono Mountains 350.

Of course, Busch would in all likelihood win whatever race replaced the second event at Pocono Raceway, but he has ideas about what that should be too.

This was the second consecutive season Pocono played host to a Saturday-Sunday NASCAR Cup Series doubleheader, but the first time it included fans as a result of the COVID-19 pandemic in 2020.

On one hand, the campground within the Long Pond, Pennsylvania speedway was packed in a way it hasn’t been in over a decade, but the TV ratings for the Saturday race were down a million to its Sunday counterpart.

Busch doesn’t see a need for doubleheaders because he believes most tracks should only get one race weekend per year.

“We don’t need to go to any racetrack more than once,” Busch said. “You know what I mean? Spread the wealth. That’s my opinion.

The parent company that owns Pocono Raceway (Mattco Inc.) also operates a historic short track in South Boston, Virginia that played host to the Xfinity Series and Truck Series as recently as the 2000 NASCAR season.

Speedway Motorsports Inc. is working on an agreement with the City of Nashville to bring NASCAR back to Fairgrounds Speedway. If that proves successful, a Cup event would have to come at the expense of another SMI property that currently has a date.

Of those tracks, Atlanta, Texas and Las Vegas each have two dates.

NASCAR is exploring street races in Chicago or Mexico City and a potential stadium race inside the Los Angeles Colosseum.

Busch sees so many venues that could potentially play host to a Cup Series event over a 36-race schedule but a third of them currently features two dates a year.

“Just going to these places, you still want to be able to spread the wealth around a little bit,” Busch said. “That’s my opinion. We should go to every place once, find a couple more places we can go to and spread the wealth.”