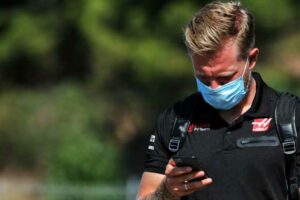 Kevin Magnussen is to make his IndyCar debut at the next race, standing in for the injured Felix Rosenqvist at Arrow McLaren SP.

When it was confirmed that Magnussen would be leaving the F1 grid after 2020, with Haas opting to drop him and team-mate Romain Grosjean, the Dane stated an interest in moving to IndyCar.

“IndyCar has been something that I’ve been interested in always,” he said.

“My dad was an IndyCar driver back in the nineties and I’ve been to into IndyCar races with him as a small child and just always thought it was super cool.

“I would love to have a go in that sometime.”

However, while Grosjean found a seat in the sport with Dale Coyne, Magnussen didn’t and ended up driving for Chip Ganassi Racing in the IMSA WeatherTech Series this year instead.

Now though, he’s going to get his shot in IndyCar after all.

Making my @IndyCar debut this weekend in the @ArrowMcLarenSP! Standing in for @FRosenqvist while he recovers from his crash last week. Big challenge to go straight into a race having never driven an Indycar before but I couldn’t say no to the opportunity 🤩 Get well soon Felix 🙏🏻

Last time out at the Detroit Grand Prix, Rosenqvist crashed his McLaren into a tyre wall at 100mph on Saturday and had to stay in hospital overnight, thus missing the Sunday race.

Oliver Askew stood in for him, and the plan was for him to do so if the regular driver didn’t recover in time for the next round.  However, Askew will now be replacing the injured Rinus VeeKay at Ed Carpenter instead.

Therefore, with medics ultimately ruling that Rosenqvist isn’t yet ready to return, McLaren needed to find another replacement.

Magnussen has connections with the team having driven for them in F1, and being in the area as he too raced in Detroit last weekend, taking his first victory in IMSA, he was the logical choice.

“Felix will be replaced for the REV Group Grand Prix by Kevin Magnussen, who will be making his IndyCar debut,” a team statement read.

“Magnussen made 19 starts for the McLaren Formula 1 team in 2014, including a career-best finish of second at the Australian Grand Prix that year.

“Further updates about Felix’s status will be shared in due course.”