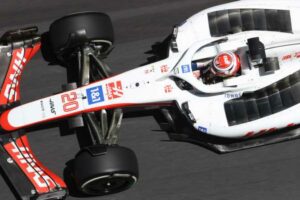 Taking up residence in Maranello has benefitted Haas with Kevin Magnussen saying it has made communication between the various departments simpler.

And that, he says, shows in the car and the team’s results.

Ever since Haas entered Formula 1 in 2016, Haas have enjoyed close ties with Ferrari, running their engines as well as buying allowed parts and making use of their wind tunnel.

That relationship grew even closer when Haas took up residence in Ferrari’s Maranello headquarters while former Ferrari personnel, including senior designer Simone Resta, moved over to Haas.

Those moves were made while Magnussen was sidelined from Formula 1, the Dane parting ways with Haas at the end of the 2020 season before rejoining them for this year’s championship.

“That’s been a nice change in the team,” he said, “the year I’ve been away they’ve moved.

“It’s a bigger group now in Maranello, I think that helps communication between the different departments, just being able to go and talk to each other.

“Our team for all those years have been spread out over the world: in the US; and then two places in Italy and one in England, so very spread out.

“And I think in terms of communication, it makes it easier when you can just go to mate’s desk and have a chat.

“So, it’s better, and it’s also grown, and we have more people and it feels better. And, of course, the car shows that too. So it’s in a good place Haas are pointing.”

According to AMuS, Mercedes, McLaren, Aston Martin and Alpine have asked the FIA to investigate the Ferrari-Haas relationship.

Thought this might happen given Ferrari are on top and Haas are quick.

Not sure what they hope to find that the FIA hasn’t already approved. #F1 pic.twitter.com/SHmVmPLGyF

But while rivals teams have questioned Haas close ties with Ferrari, Steiner revealed earlier this year that it is all above board according to the FIA.

“The relationship is also regulated by the FIA’s rules,” the Haas team principal said earlier this year. “You cannot do more just because we are sitting in Maranello.

“It was convenient, there were offices available because of the budget cap coming in, and Ferrari had already planned the buildings.

“We took advantage that there was office space available and we have about 30-35 people from Ferrari who moved over to us because of the budget cap in F1.

“But when we are in the wind tunnel session, we always had an office our people could sit in and not have to stand around just in the control room of the wind tunnel.”

Alpine was one of the teams that complained, fearing that information could be passed between Ferrari and Haas as they grab a cup of coffee or chat about the water cooler.

Steiner’s response to that to RTL: “We do everything according to the regulations.

“I said to the FIA, ‘Guys, please come and check every day, because we are doing everything according to the rules’.

“The FIA ​​​​is with us in Maranello, checking. They are welcome. If they find something, we will improve it. But they will not find anything [to suggest] that we have copied a car.”