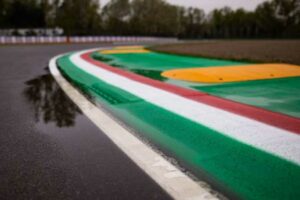 The kerbs at Imola have been predicted to prove a problem for the 2022 cars as the sport returns to the track for the first time since the regulation changes.

Having first hosted a race in 1953, the Imola circuit is one of the older tracks in the 2022 calendar and represents a significant change from the races so far in Bahrain, Saudi Arabia and Australia.

One of the main issues facing the teams will be the kerbs and the potential damage they could cause to the floor of the 2022 cars.

As part of the regulation changes, a lot of thought was put into floor aerodynamics and as a result, the cars are lower. While this has not proved such a problem in the opening three races, the more aggressive kerbs at Imola could prove a different challenge entirely.

A senior engineer told motorsport.com that if an incident such as Lewis Hamilton going onto the kerbs to avoid Max Verstappen at the start of last year’s race happened this year then it would have “badly crunched” the floor.

Who remembers this epic duel to the flag?! 🍿

“If you look at the start of last year’s race, when Lewis Hamilton had to run across the kerbs at Turn 1 to avoid colliding with Max Verstappen, that would have badly crunched his floor if it happened with a 2022 car,” the source is reported as saying.

Alfa Romeo’s head of trackside engineering Xevi Pujolar said this consideration could have an impact on how the team sets up this weekend.

“For sure it is something that we are taking into consideration,” he said.

“And it can be a limiting factor. In some occasions, and the way you need to set up the car, and how much track you use, you really need to be careful in some parts. It could have an impact on the weekend.”

Kevin Magnussen described the cars as “lower and stiffer” but said he hoped that the new cars could still be “competitive” when it comes to kerb riding.

“The cars are lower and they’re also stiffer, so kerb riding is a little harder than it used to be with the old cars,” he said.

“We’ll see, I hope whatever challenges these new cars have we can still be in the competitive range in terms of kerb riding. Again, I think our car is all-round very strong so it should be alright.”