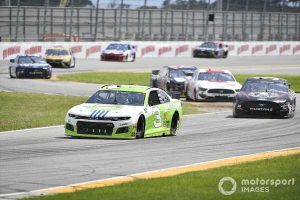 An unexpected call produced a surprise NASCAR Cup Series debut for Kaz Grala and perhaps an even more shocking result.

Austin Dillon, who drives the No. 3 Chevrolet for Richard Childress Racing, tested positive Friday for COVID-19 after experiencing some mild symptoms.

That prompted the need for a substitute driver this weekend but because the series was making its inaugural start on the Daytona Road Course, drivers this weekend were allowed to compete in only one event.

RCR’s options became limited and it couldn’t use A.J. Allmendinger – who the team had tapped as a relief driver during the pandemic – since he competed in Saturday’s Xfinity Series race. RCR turned instead to the 21-year-old Grala, who has made two starts with the team in the Xfinity Series this season.

After starting from the rear of the field because of the driver change, Grala worked his way into the top-10 late in Sunday’s race and emerged with an impressive seventh-place in his unplanned series debut.

“It certainly was an honor to get the call from Richard Childress and drive his iconic No. 3 American Ethanol Chevrolet. I honestly had a blast,” Grala said. “These Cup cars have so much power, which I really enjoyed. Today exceeded my expectations.

“My goal was to come in today, run all the laps, not tear anything up, and get a top-30 finish so this is certainly far above my wildest dreams. Justin Alexander (crew chief) called an excellent strategic race, which really helped us get up there and compete inside the top-20 most of the day.

“We were able to lead laps in my NASCAR Cup Series debut, and it was fun to mix it up with some of my childhood heroes.”

While no driver in the field received any practice or testing on the 3.57-mile, 14-turn course prior to the weekend, Grala was on par with everyone else in the field, aside from his late notice that he was going to participate.

Getting the job done

But by the end of the race, he felt comfortable enough to make some aggressive moves to gain positions while also trying to preserve a respectable series debut.

“Before the last caution, I made a bold, three-wide move on a restart, which got us a ton of positions. I don’t really know what I was thinking, but it worked and put us around 12th,” he said.

“We were in pretty good shape with some fresher tires than the guys ahead of us and opted to stay out under the last caution. We were able to pick off a few more of those guys to finish comfortably inside the top-10.