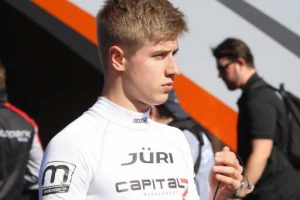 The Estonian racer, who in 2020 has been competing in Formula 2 and the Formula Regional European Championship, gained his Formula 1 superlicence having completed 300 kilometres of running in a Formula 1 car.

Vips has contested four rounds of the 2020 F2 season with DAMS, scoring his first podium in the series with P3 in the Tuscan Grand Prix sprint race at Mugello.

It was there where he scored his only other points of the campaign with P7 in the feature race.

Vips, still only 20, was due to compete in the Super Formula Championship this season in hopes of finding similar success to that which Pierre Gasly enjoyed in the Japanese series.

Sadly though the global pandemic meant he wasn’t able to take part.

Istanbul will have VIPS! ??? After being awarded his FIA Superlicence following the completion of 300km in an #F1 car, Juri Vips will join us and @AlphaTauriF1 trackside as Reserve Driver this weekend #TurkishGP pic.twitter.com/gd94fyZCzk

Vips isn’t thought to be one of the drivers in contention to replace Daniil Kvyat at AlphaTauri for 2021, but the Russian driver knows he faces a huge challenge to keep his seat despite a P4 finish as the previous round at Imola.

“Look, I have no illusions that things are difficult,” Kvyat told Motorsport.com. “In fact, that the chances are slim, sure.

“Obviously Red Bull has their young driver programme which has to work and has to be promoted. It’s always been like that and I don’t see any reason why it should change for me.

“But I’m given this opportunity, and there are races to go still.

“As you saw at the last race, it was an amazing race. And with these kind of things, it will always go in your pocket something positive.

“It’s important to keep pushing until the very last moment. It will always be remembered, it will always be something plus. And you never know what can happen also inside Red Bull. That’s the only thing I focus on.

“The rest will not help me. I know there is a high chance I might not be there next year.

“And also, especially because we have a still quite a big chance in the Constructors’ Championship to move one position ahead.”

At the Turkish Grand Prix Red Bull will be celebrating their 300th race in Formula 1.