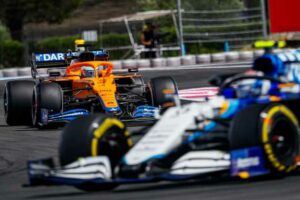 Jost Capito says Williams need McLaren to “get their stuff right” in order to keep Alfa Romeo out of the points and Williams P8.

With four races remaining in this year’s championship, Williams are holding down eighth place in the Constructors’ Championship.

The Grove team have scored 23 points, putting them 12 ahead of Alfa Romeo.

It is, however, the latter who have shown the better pace in the last three races with Kimi Raikkonen in the points at the Mexican Grand Prix while his team-mate Antonio Giovinazzi has bagged a hat-trick of P11s.

Williams’ best finish in those same three races was a P14.

With points in most races almost guaranteed to go to Red Bull, Mercedes and Ferrari, Capito says Williams need McLaren to bring home double points and play their part in keeping Alfa Romeo out of the top 10.

“Of course we are nervous,” the Williams team principal told The Race. “They have the chance to catch up, there is no doubt.

“A lot can happen in the last races so we have to watch out.

“They have had a faster car than we have all season, so we’ll see.

“I think as long as McLaren get their stuff right then it might be difficult for them to get points.”

New day, new opportunities. Let's go and get them 💪 pic.twitter.com/BgoIs3dtTW

The German is hoping Williams can also do their part this weekend at the Sao Paulo Grand Prix, expecting the FW43B to be more competitive at the Interlagos circuit than it was in Mexico.

“We knew Mexico would be most likely the worst condition for our car because of the altitude, and then you need Monaco configuration to have Monza downforce and this doesn’t suit our cars,” he said.

“Now here, in the altitude we have now, it’s much more normal condition and it suits us better.”

But having failed to make it out of Q1 in Friday’s qualifying, Capito reckons this week’s race could be another point-less one for Williams, which would be their fourth on the trot.

“I don’t think points are realistic,” he added.

“We go into the weekend to get the best out of it we can.

“But if there’s a standard normal race, I don’t think there are points.

“If there are no retirements, nothing happens in the front, then I don’t think it’s realistic to have points.”

One boost for Williams was that a spin for Raikkonen in sprint qualifying means that in 18th, he will start the race behind both Latifi and Russell.