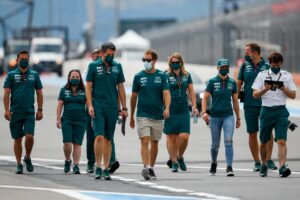 Aston Martin ambassador Jessica Hawkins has paid a glowing tribute to the “great influence” Sebastian Vettel is having on the team.

Vettel joined Aston Martin this season after being released at the end of a six-year spell with Ferrari, the highlight so far his second-place finish in the Azerbaijan Grand Prix.

Hawkins, meanwhile, was announced in May as an Aston Martin driver ambassador, a role she is combining with competing in the W Series. She has also worked extensively as a stunt driver, including in the forthcoming James Bond film No Time to Die.

The 26-year-old says that along with Michael Schumacher and Fernando Alonso, Vettel was one of her early heroes – and now, by attending track walks and team meetings, she has the opportunity to learn from the four-time former World Champion’s vast F1 experience.

“He is a very passionate guy, you can feel how much he wants success,” said Hawkins in an interview with Auto Bild.

“He has a great influence on the team and is very proactive, demanding. I’ve done two track walks with him and he is very focused – you can see why he is a four-time World Champion. For me, it’s great to be able to learn from someone like him.

“Apart from that, he is such a nice, warm-hearted person. He really took an interest in me and my career. That’s surprising because he has a million things on his plate, but he still engaged with me. That’s not a given in Formula 1.

“For me, it’s a dream come true to be Sebastian Vettel’s team-mate. It’s crazy that he and Lance Stroll are my work colleagues now.

“I was there for the first time in Baku and immediately felt like an equal member of the team. Everyone has taken me under their wing – including Sebastian.”

Baku was, as mentioned above, comfortably the best race of the year up to now for Aston Martin – a perfect time for Hawkins to join the team.

“The atmosphere was incredible,” she added. “It was my first Formula 1 weekend but I could feel directly how hard everyone works for success. Many dedicate their lives to this job.

“That’s why a triumph like that is extremely important for the morale of an entire team.”