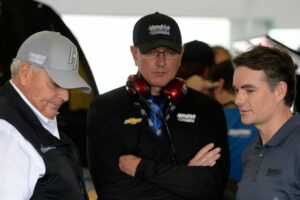 Hendrick Motorsports officially has its successor.

Jeff Gordon, 49, will step down from his position as a NASCAR on FOX television analyst at the end of the year to become vice chairman of the legendary Chevrolet Cup Series organization. In this capacity, Gordon will serve as the second highest ranking official behind founder and chairman Rick Hendrick.

In this long-anticipated move, Gordon will maintain a daily presence at the Concord, North Carolina based race team and focus on its competition and marketing efforts alongside team president Marshall Carlson and general manager Jeff Andrews. He will join Hendrick on both the Cup Series ownership council and the sanctioning body’s diversity, equity and inclusion committee.

“I cannot put into words what Hendrick Motorsports means to me,” Gordon said in a team release. “In many ways, it’s my home and the people here are my family. I’ve never lost my passion for the organization, for our sport, and for the sheer challenge of racing and winning at the highest level.

“Being part of the competition is where I’m happiest and feel I can make the biggest contribution to the continued, long-term success of the team. Rick and I have a shared vision, which is based on the values he’s instilled, the culture he’s built and our desire to be the very best in all categories, on and off the track.”

Gordon has long been the presumed successor to Hendrick at the race team.

Gordon became a partial owner of Hendrick Motorsports and was long listed as the de facto owner of the No. 48 team when it was spearheaded by Jimmie Johnson and crew chief Chad Knaus. He remains the only partner in the 13-time championship winning organization and defending champions with Chase Elliott and the No. 9 team.

“Jeff and I have talked about this for many years, and I feel it’s a natural evolution for him and our company,” said Hendrick, 71, who is also chairman and CEO of Hendrick Automotive Group. “I’ve always been impressed with his business instincts. On some level, he’s been involved in every major decision we’ve made over the last two decades, and his influence has continued to grow since he stopped driving. He understands our culture, our values, and the importance we place on our people and our partnerships.

“I love racing and competing, and Jeff is the only person I know who hates to lose as much as I do. I feel great physically and have no plans to go anywhere anytime soon, which is exactly why it’s the right time. In the years to come, I couldn’t be more energized about working arm-in-arm with him and cementing the future of Hendrick Motorsports together.”

Gordon joined Hendrick Motorsports as an analyst for FOX Sports after his retirement from full-time competition in 2015. He will continue to work on television and in digital capacity through Dec. 31.

“I cannot thank the entire FOX Sports family enough for the incredible opportunity I’ve had over the past six seasons,” Gordon said. “I’ve come to truly appreciate the responsibility of bringing the sport to our fans and the tremendous work that goes into our broadcasts each and every week. I’m certainly going to miss it, but I will forever be grateful to FOX for the experience and for the trust they’ve placed in me. It’s been a privilege to work with such a talented group of people.”