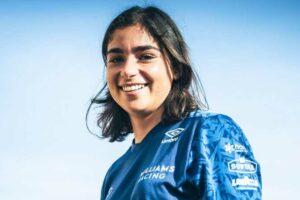 Jamie Chadwick says she will not be getting on board with her Williams team-mate Alex Albon’s superstition of dying his hair red.

An improved Williams car? Being the leader of the team? More experience? Nope, it is the red hair. That is what Alex Albon would (jokingly) tell you were you to ask him what has been the main cause of his strong start to the season.

The origins of Albon’s red hair superstition date back to just before the Melbourne Grand Prix and a visit to a children’s charity in Thailand. One of the children decided the Williams driver would look better with a dab of red dye running through his hair and after Albon had produced a tyre masterclass in Melbourne to earn his first point, the red hair looked set to stay.

Two weeks later, it had grown out and when he crossed the line at Imola without a point, he decided to go full send on the hair dye.

He arrived at the track for the Miami Grand Prix with a full head of red hair and it paid off with him crossing the line in P9.

“No upgrades are ever needed, you just need to dye your hair!” he joked with Sky Sports F1 after the race.

The Thai-British driver then went on to reveal he had a bet with his team and their hair colour of choice should he earn points in Miami.

“Before the weekend started, we did say if I scored points this weekend the whole team are going to dye their hair red,” he said.

“I just went to the engineering room and they are all starting to backtrack their comments. They are all like ‘oh no, it was a podium’ and I’m like ‘no, it wasn’t!’”

However, it seems one team member who will not be dying her hair is Williams development driver and two-time W Series champion Jamie Chadwick.

Chadwick enjoyed a successful weekend herself as she won both of the opening W Series races in Miami, but confirmed she would not be following Albon’s lead.

“I’m going to just do everything I did last weekend,” she replied when asked if she planned to dye her hair on Sky Sports’ Any Driven Monday. “Which fortunately doesn’t revolve around me dying my hair red.

“[It was a] great result for the team. I went down to see them just before the race and everyone was so happy in the camp but disappointed after qualifying.

“They felt they had deserved more given what the pace was. [I’m] just really happy Alex was able to reward the team with those points and [it is] another step forwards for the team.”