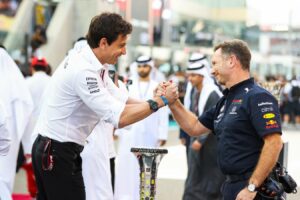 Toto Wolff reportedly clashed with Christian Horner in a porpoising debate as team principals met at the Canadian Grand Prix.

The bouncing phenomenon has occurred as a result of Formula 1 adopting ground-effect aerodynamics as part of the regulatory overhaul for 2022 and at the Azerbaijan Grand Prix, it sparked discussions surrounding the impacts of it on the health of drivers.

During the early rounds the issue had largely been tied to Mercedes, the bouncing both uncomfortable and seemingly also detrimental to their performance.

Ferrari too were suffering with it more than most, yet they are battling with Red Bull at the top of the pack whereas Mercedes are not.

But with the porpoising impacting drivers more widely and severely in Baku, many of them stressed the cars cannot continue to ride like this.

It led to the issuing of a technical directive before the Canadian Grand Prix, the FIA setting out parameters to monitor the bouncing going forward, with teams potentially being required to raise their cars if they cannot satisfy the FIA.

Not all teams were in favour of the ruling, the most vocal critic being Red Bull who lead the Constructors’ Championship, while their driver Max Verstappen sits atop the Drivers’ standings, looking to claim back-to-back World Championships.

Mercedes boss Wolff had already expressed his belief that team bosses were playing “political games” when it came to porpoising, “manipulating” what is being said by drivers in order to protect their “competitive advantage or gain it”. He called their behaviour “pitiful”.

In addition, rival teams had also reportedly considered protesting Mercedes after they ran a new floor on Friday, should it have been used again the following day, which it was not. There were said to be suspicions over how Mercedes had introduced the new floor so soon after the technical directive was issued.

Wolff’s comments to Motorsport.com came after what was believed to have been fiery discussions between the team bosses in Canada, a new report from the Daily Mail shedding some light on what happened in that meeting.

“One witness said Mercedes boss Wolff ‘lost his s***’ while another reported he went into ‘full Abu Dhabi spec’,” their report states, the latter account being in reference to Wolff’s fury after the controversial conclusion to the 2021 title fight.

Wolff and Horner were said to have clashed in the meeting, the latter having made his disgruntlement regarding the technical directive public, calling it unfair to change the rules to suit one team, Mercedes of course being the team he was referring to.

Another insider at the meeting said Ferrari boss Mattia Binotto had intervened, telling Wolff he disagreed on the need for a change to the regulations simply because the Mercedes W13 has not yet proven successful.

An alternative view was also put forward that Wolff’s message was delivered “powerfully” if not “excessively”, with neither Wolff nor Horner, who “equally stood his ground”, establishing dominance.