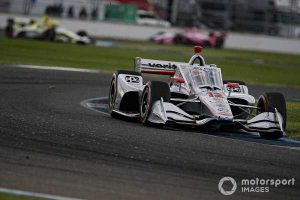 Team Penske-Chevrolet’s Will Power scored the 39th win of his career as he led from pole to checkered flag, despite intense pressure from Colton Herta in the final stint, while Josef Newgarden trimmed Scott Dixon’s points lead again.

Power made a strong start and Herta’s Andretti Autosport-Honda locked up at Turn 1 but maintained second ahead of teammate Alexander Rossi, Arrow McLaren SP-Chevrolet’s Pato O’Ward in fourth, Alex Palou in fifth ahead of his Dale Coyne Racing-Honda teammate Santino Ferrucci, up from 11th. Josef Newgarden initially fell back but on Lap 3 took 10th from the primary-tired Ryan Hunter-Reay who had tumbled from sixth at the start as he struggled to get the harder compound up to temperature in the opening laps.

At the start of Lap 7, Jack Harvey outbraked Ferrucci for sixth into Turn 1, while Newgarden moved up to ninth, ahead of Marco Andretti, and now with Graham Rahal (using blacks) in his sights. Two places behind him ran Scott Dixon, the Chip Ganassi Racing-Honda driver running the Firestone primaries, and trying to protect a championship lead that had reduced to 40 points yesterday.

With this race set at 75 laps (as opposed to yesterday’s 85-lapper), it appeared most drivers were planning on just two stops and were therefore having to save fuel from the word go. Both Hunter-Reay and Helio Castroneves in the second Arrow McLaren SP pitted on Lap 10, and thanks to a bad stop for RHR, the pair were in a similar part of the track and had an excellent duel. Charlie Kimball of AJ Foyt Racing-Chevy would also stop early.

Newgarden had moved up to eighth ahead of Rahal on Lap 10 and on Lap 12 he was past Ferrucci too.

Given the nature of this fuel saving race, Power wasn’t sprinting away up front, holding a 1.6sec lead on Lap 14, and only a nine second lead over seventh-placed Newgarden.

Dixon’s Ganassi appeared to have a large gouge from his floor, probably legacy of a rub with Hunter-Reay as he passed him around the outside of Turn 7 at the end of the back straight. His strategist, Mike Hull told NBC that there was no effect, but that seemed hard to believe. Dixon was fortunate, therefore, to have teammate Felix Rosenqvist running in his wake in 12th, protecting him from further attack.

Newgarden dived smoothly inside Harvey at Turn 1 on Lap 20 to take sixth, and the following lap he was past Palou for fifth. Indeed, the Spanish rookie soon fell victim to Harvey who would top on Lap 25.

Power had eked out a 5.6sec lead by this point, not because he was extending himself, but because Herta was losing touch, and beginning to hold up Rossi and O’Ward.

The latter two and Newgarden pitted on Lap 26, all taking on primaries. Dixon stopped too, but Power and Herta went a lap longer. Herta came out just ahead of Rossi, but on hot tires, Rossi passed him around the outside of Turn 7 to grab second.

Further back, Dixon lost his wingman when Rosenqvist made contact with Kimball, and they slid into the Turn 7 grass and slid down the order.

Castroneves and Hunter-Reay, having made early stops – therefore committing to a three-stop strategy – and running on red tires, had made strong progress and ran sixth and seventh, behind Newgarden, but not for long. Castroneves pitted on Lap 32 and Hunter-Reay on 34th. That boosted Dixon to ninth, running reds and closing on primary-tired Palou, who he passed on Lap 37. He was now three places and 10sec behind Newgarden, with Harvey and Rahal between them.

Simon Pagenaud, from 19th on the grid, moved past Ferrucci into the Top 10 on Lap 38. Up front, Power seemed content to maintain a 4.5sec lead over Rossi but 10 laps later the Andretti driver had trimmed his deficit to just under three seconds.

Pagenaud was first of the Top 10 runners to make a pitstop on Lap 50. Newgarden, Harvey and Rahal did the same on Lap 51, and Power ducked in on Lap 52, and so Rossi, Herta and O’Ward had to cover their bases and do the same.

A lap after their pitstops, Newgarden dived up the inside of O’Ward at Turn 7 to move up to fifth (net fourth as Hunter-Reay didn’t make his final stop until Lap 55).

Rossi had opted for primaries for the final stint, whereas Power had gone for scrubbed reds like the majority of the field and he was trying to nurse his tires and fuel when he got held up by Andretti as he lapped him. That allowed Rossi to close up to within 1.6sec of the lead Penske, while Rossi too was being caught by Herta. With 12 laps to go, the trio were covered by just 1.8sec, and were 10sec up the road from Newgarden.

Into Turn 1, Herta dived past teammate Rossi to grab second before setting his sights on Power, who was coming up to lap ex teammate Castroneves. Herta got Power’s lead down to half a second on Lap 70, when finally Castroneves let them both pass him down the back straight. Not helping Herta’s cause was the huge amount of marbles off the racing line. Meanwhile Conor Daly tried to help by getting out of Herta’s way but almost tripped him when they went the same way.

Despite Herta’s best efforts, he couldn’t quite close the gap, Power using his push to pass very cannily, and holding on to win by 0.9sec.

Rossi dropped to five seconds behind this duo, but still beat Newgarden by 3.3sec who just about staved O’Ward by half a second.

Dixon’s lead over Newgarden heading into St. Petersburg has been reduced to 32 points.