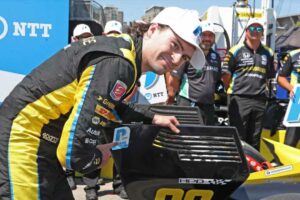 Like the old Doobie Brothers hit, IndyCar is “Takin’ It To The Streets” again this weekend in the second annual Big Machine Music City Grand Prix, held on a temporary street course in downtown Nashville.

Last year’s inaugural race was one of the most frustrating events ever for Andretti Autosport driver Colton Herta. He started from the pole, then dominated the race, leading nearly half of the 80 laps—39 to be exact.

Disaster struck, however, with six laps to go as Herta tried to dive-bomb his way to close in on race leader and eventual winner Marcus Ericsson. Herta came into Turn 9 too hot, locked up his brakes and slammed into the tire barrier, ending his day with a dismal 19th-place finish and dropping him to eighth in the standings.

While he would go on to win the season’s last two races (Laguna Seca and Long Beach), it would be too little, too late for the second-generation IndyCar driver, who—due to that wreck and three other DNFs in the 16-race season—ultimately finished fifth in the final season standings.

Now, Herta wants to avenge last year’s mishap and win Sunday’s event—which is the fifth race in the last 22 days (IndyCar’s next race is August 20 near St. Louis).

“So much,” Herta said when asked how much he wants to avenge last year’s disaster. “It’s an awesome market for IndyCar. I wish it came sooner. It’s so much fun to be downtown, right there in the heart of Nashville, and an awesome track with its unique challenges compared to a lot of the street courses that we go to, and it seems like we’re going to have a lot more unique challenges this weekend if it ends up raining like the forecast says.”

“It’s an awesome market for IndyCar. I wish it came sooner. It’s so much fun to be downtown, right there in the heart of Nashville.”

In addition, he earned the pole and finished second in the most recent road course event, just a few weeks ago at Toronto. All told, in addition to his seven wins, Herta has four additional podium finishes, all on road or street course layouts.

That’s why he’s looking forward to returning to Nashville, but with a much better outcome this year than what happened last year.

“Yeah, it just seems to work. At all the street circuits we go to, we seem to have a phenomenal car to drive. Hopefully this kind of continues. We had a great car last year, but you never know what you’re going to get when you come back to a street circuit and there’s some changes to the track. I’m hoping it’s as close to what it was last year this year, and we should be in good shape.” 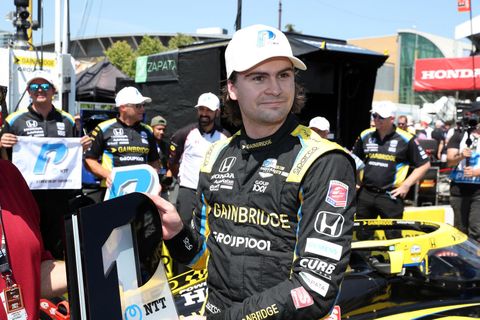 Herta, who is rumored to potentially be headed to Formula One perhaps as early as next season or, more realistically, in 2024, has exceptional talent. But he’s also made several mistakes—like last year at Nashville—that have cost him dearly, particularly when it comes to having a chance at winning the championship.

“Yeah, yeah, it is (frustrating),” Herta said. “The most important thing is we’ve had speed pretty much everywhere we’ve gone. I think the Indy 500 was kind of the outlier where we weren’t great, qualified 25th, and weren’t that great in the race (finished 30th, completed just 129 of 200 laps due to a throttle issue).

“I think everywhere else I’ve been very comfortable with the car and very confident, but for one reason or another, we just can’t get a roll going. I thought after Toronto we would get it going, then we had an issue in Iowa (finished 24th in the first race and 12th in the second race of the weekend doubleheader there). We weren’t really incredibly fast in Iowa anyway. I think we still could have finished in the top 10.

“Then obviously come to Indy and leading the race and that happens (gearbox broke, leaving him with a 24th-place finish).”

Herta has just one win, two podiums and two poles this season. For all the talent he possesses, he easily should have a lot more in each of those categories. While his championship hopes are over, he still has some things he can improve upon and use as a springboard for an even better year in 2023.

“I’d like to just finish out the season and just be in the top 5 in every race and just get kind of the ball really for what we need with no more issues and no problems and just finish off the year strong,” he said. 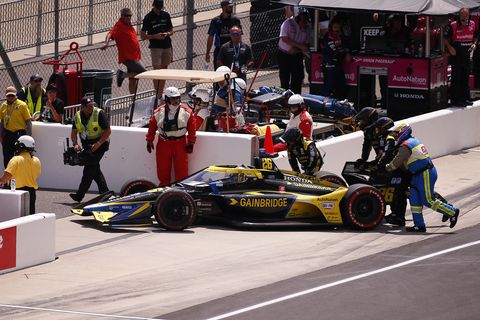 Not being in contention for the title with just under one-quarter of the season still left to go only adds to Herta’s angst and frustration, knowing that if he hadn’t had so many DNFs or had perhaps better pace in several other races, he could potentially be right in the middle of the pack of drivers challenging for the championship.

“Realistically we’re not going to win the championship, it’s too far out of reach,” Herta said. “Maybe if we have an amazing string of the rest of the races, we can maybe creep into the top 5, but that would be a pretty big ask. I’ll just kind of use the end of this season to focus on the next season and kind of butt through it.

“(We’re just going to) try to get those top 5s every single race. Hopefully we’ve got some good races coming up for us. St. Louis last year, we were leading when we had a hashed off brake; Nashville, that went—I don’t want to talk about that one, but we were fast there; and Laguna, we’ve won two times there in the last year. We’ve got really good races coming up for us, we just need to maximize what we can do on those weekends.

So yeah, the confidence is still there. I understand these things happen and stuff, but unfortunately it’s happened quite frequently and a lot this year. We need to kind of be on top of it, make sure we understand what’s going wrong so it doesn’t happen again.”