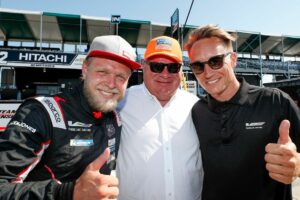 Kevin Magnussen spent the 2020 racing season in Formula 1 telling anyone who asked, no he wasn’t having any fun getting his brains beat in every race weekend.

Playing the role of backmarker in Formula 1—the biggest racing stage in the world—had Magnussen and teammate Romain Grosjean dreaming of days of old when they were both tearing up the track and winning races in lower levels. Running with the Haas F1 team, now a six-year-old Formula 1 team that has yet to place a driver on a podium, had taken a toll.

Both Magnussen and Grosjean were let go after the 2020 season, and both racers left F1 vowing to get back to winning races, standing on the podium, winning poles and smiling again. So far, it’s mission accomplished.

On Friday at Belle Isle in Detroit, Kevin Magnussen won a pole in the IMSA WeatherTech SportsCar Championship. It was his first career pole in the series and it came in the No. 01 Cadillac Chip Ganassi Racing Cadillac DPi with teammate Renger van der Zande.

And, yes, Magnussen was smiling ear-to-ear on Friday in Detroit.

“Formula 1 is great. It’s fun to drive the cars, but at the end of the day, you want to do well at whatever you do,” Magnussen said. “It doesn’t matter if it’s Formula 1 or rental go-karts. You want to win. That’s what it’s all about.

“Coming here, I knew when I signed up with Chip Ganassi I’d have a chance at winning races. We haven’t done that yet, but we’ve been leading and in the fight for the win. It’s been more enjoyable than anything I’ve done for the last few years.”

This weekend in Detroit has also given Magnussen a chance to catch up with former Haas F1 Team teammate Grosjean. Grosjean is racing this weekend in the NTT IndyCar Series race on Belle Isle.

“It was great to see him,” Magnussen said. “The last time I saw him was in the hospital after his crash in Bahrain, so it was good to see him out there.”

It was also a chance for the two drivers to share stories of the good things that are happening in their racing careers these days.

“I’ve won a pole position and he’s been on the podium,” Magnussen told Autoweek. “I always knew he’s a great talent. It’s good to see he showing that in IndyCar. I’ll follow him this weekend. It will be fun to watch him live in IndyCar.

“I feel very privileged and blessed to have been able to be in F1 and have a career in Formula 1, but as I’ve said before, If you know you’re not in the hunt for wins or even the podiums, at the end of the day it doesn’t matter what it is. I’ve just missed going racing with the aim of winning. The year, the feeling I have going to races reminds me a little of how it was before Formula 1.

“I’ve kind of missed that feeling.”

The 28-year-old Magnussen, who is the son of multiple-time IMSA and American Le Mans Series champion Jan Magnussen, knows that he’ll probably always be identified with his racing chapter in Formula 1 that lasted from 2014 through the 2020 season. Kevin’s only podium finish in F1 came with a runner-up finish at Australia in 2014—in his very first of 119 career races.

Would he ever entertain a return to F1?

“If I had a Mercedes or a Red Bull I wouldn’t say no,” he said. “I don’t think many racing drivers would, but that’s not going to happen. As I said before, I’m very, very happy with the opportunity that I had in Formula 1. Not many people get to have that many years in Formula 1.

“I’m super happy about that and I had some great experiences. Having said that, I feel fresh motivation, and I feel like it’s fun again.”

Here we go! My dad and I are going to be racing in the same team at Le Mans this year in LMP2. It’s something we’ve tried to do for years and truly a dream come true. pic.twitter.com/CfV8YYfs43

Magnussen still keeps a keen eye to Formula 1 and he’s even some some race analysis for TV this season. He also retains a sweet spot in his heart for his brethren at Haas, where he toiled from 2017-20. Haas is once again last in the Formula 1 standings this season.

“I feel for them,” he said. “They’re great people. I have many friends and they’re kind of like family to me so, I feel for them. But I’m sure it’s going to get better for them when these new rules come in (in 2023)There will reset basically all the teams. Of course, it’s still going to be the big teams at the front, but I hope it’s going to be a little closer.”

“Chip is a bit of a legend in motorsport, especially in North America,” Magnussen said. “It’s a great privilege to be with Chip Ganassi and factory-supported Cadillac in this great championship.”

A championship, Magnussen added, he’s enjoying the challenge of racing in a series that features tracks that might not be—OK, they’re not as smooth as the F1 tracks he’s used to. Detroit’s street circuit on Belle Isle definitely got his attention on Friday.

“Of all the tracks we go to, I’m blown away at how old-school it is and how much fun it is drive,” he said. “I’m having a great time.

“It’s more fun and the consequences are bigger. Usually, on street tracks, I’m used to in every big braking zone, there’s a huge runoff. Out here, there’s a wall at 90 degrees. You feel like you need to tighten your seat belts and move your brake lights.”

When asked to compare the cars, Magnussen said there’s really no comparison.

“It’s a different sport almost,” he said. “The principles are the same at the end of the day. The Formula 1 car is very optimized. There’s a lot of things you can optimize in a Formula 1 car. Even the slowest Formula 1 car, it drives very well and it’s actually pretty easy to drive because it’s not doing anything unexpected.

“Coming into a car like the DPi, it’s a little more simple technology, it’s a heavier car. It’s just a bigger challenge because it does bite you a little bit sometimes. it’s more difficult to be fast in DPi. You’ve got traction control in the DPI which is obviously a help, but it’s also something that changes the driving style and it’s something to get used to after so many years in single-seaters in Formula 1.”

“IMSA compared to Formula 1 is a whole different atmosphere.”

The cars and tracks are the only differences.

“IMSA compared to Formula 1 is a whole different atmosphere,” he said. “Everyone over here seems to have a little bit more of a smile on their face and is a little bit more friendly to each other. It’s fiercely competitive, but a little more laid back.”

Magnussen also took time for a little shout out to those who think the popular Netflix series Drive to Survive projected an accurate depiction of the relationship between he and Grosjean during their days with Haas. While they not have been the best of buddies, the relationship was not atypical of many teammates in F1.

“At the beginning we were very competitive,” he said. “We were fighting to show ourselves. Formula 1 is a very tough place. You need to beat your teammate. That is all you can do to go forward and show yourself to bigger teams. It creates a very special environment within the team. It’s way more divided (in F1).

“You’re just focused on trying to beat your teammate. It’s difficult to be very good friends in that sport. Towards the end, when were both kind of tired of the situation, we stuck together.”

Now, they they’re back to rooting for each other.