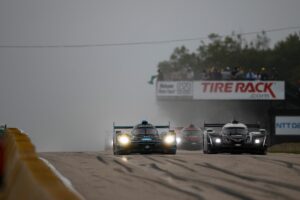 The penultimate round of the IMSA Weather Tech championship is known as moving day. Road America was a chance for DPi teams to lead the points or stay in contention for the title headed into the final round. The question became which way would the weather go and the crucial points along with it?

The rain came as anticipated and played havoc as expected, then disappeared. On a relatively narrow track where the big prototypes hit 180 mph on the three straights, Felipe Albuquerque emerged victorious from the slick trackside grass and mud at the finish in the Wayne Taylor Racing Acura, enough to put the team into the points lead.

Given the four-mile circuit’s vaunted history for late-race drama, IMSA’s visit to Wisconsin, where all five classes and 37 cars raced together, ended with a mythic feel. The atmosphere was “misty-cal” as well due to conditions in the first hour. Low-hanging clouds and mist haunted the decision-makers on the pit road. Rain tires or not? Once the rain came and stopped, the question for drivers gave way to off line or not?

The wet grass at what is sloganeered as America’s National Park of Speed and muddy edges became a factor in the end. Albuquerque managed to put two wheels on the grass to pass the leading Acura of Oliver Jarvis at Turn 8 in traffic with just under 30 minutes remaining in the two hour, 40-minute contest. When Jarvis tried to return the favor in traffic with eight minutes remaining to increase the Meyer Shank Acura team’s points lead, he paid a high price for his tires picking up debris.

Sliding off the track entering the Kink into no man’s land and then crashing head-on into the barriers at the exit, Jarvis brought out the last caution, which helped him hang on to fourth place in a snaggle-toothed Acura that was missing half of its front cowling and was running on a flat right front tire.

In between the Acuras came Chip Ganassi’s two Cadillacs after some off-line hijinks resulted in both passing the JDC Miller MotorSports entry in the closing minutes. That keeps Sebastien Bourdais and Renger van der Zander in the title hunt, now led by Albuquerque and co-driver Ricky Taylor by 19 points over Jarvis and co-driver Tom Blomqvist.

Next up is the always unpredictable Petit Le Mans, where race wins and titles are often decided in the closing minutes of the 10-hour race. It’s too early for a weather forecast—other than fraught.