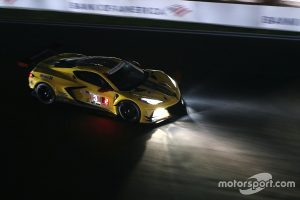 The all-GT race was 18 cars deep – six GT Le Mans entries and a dozen GT Daytona – and the race was delayed by an hour due to the wet conditions, but it was still raining when the green flag was waved.

Taylor’s Chevrolet Corvette C8.R went into the lead at the start, while at the start of Lap 2 BMW drivers Jesse Krohn and Bruno Spengler and took second and third from Fred Makowiecki but Spengler almost instantly spun at the chicane, falling behind several GT Daytona cars.

On Lap 4, Krohn went past Taylor and into the lead and immediately pulled a 2.5sec lead on the Corvette.

Laurens Vanthoor pitted the #912 Porsche 911 RSR after losing a lot of time from a spin and wall collision, and Porsche’s night went from bad to worse when the #911 entry, which had just passed Taylor for second, was spun by Makowiecki at Turn 2 into a wall. That brought out the full-course yellow as he struggled to get the car pointing the right way. Although the car did take a hit, Makowiecki was able to limp it to the pits for a long checkover and a hand over to co-driver Nick Tandy but then the car was retired. Scrub both works Porsches.

Under the yellow, the four front-running GTLM drivers pitted and handed over to their co-drivers: so John Edwards took over the #24 BMW M8, Antonio Garcia took over the #3 Corvette, Connor De Phillippi was now steering the #25 BMW and Tommy Milner replaced Oliver Gavin in the #4 Corvette.

Milner immediately usurped De Phillippi to grab third under braking for Turn 1 following the restart, and just a couple of laps later De Phillippi compounded his issues with a straight on at the chicane.

Up front, Edwards edged away from Garcia but not by much – 1.8sec after 21 laps – while Milner lay within one second of his teammate. Thanks to backmarkers and some fast laps from the reinvigorated De Phillippi, the red BMW closed right up on the Corvette pair, and passed Milner for third on Lap 26.

After 45 laps, Edwards’ lead over Garcia was only 0.7sec, while their respective teammates De Phillippi and Milner were third and fourth only 1.7sec apart and only 1.5sec behind Garcia. Then the #3 moved to the front on Lap 47 and pulled 2sec clear of the Edwards’ M8 which then came under pressure from teammate De Phillippi and Milner.

Lap 54, with 12mins to go, saw Garcia’s lead out to 6sec, but the drizzle was returning. Then Milner lost the #4 Corvette on the banking of what would be Turn 4 of the Charlotte Motor Speedway with 10mins to go. With significant rear end damage, the C8.R came to a halt at pitlane entry, and out came the full-course caution.

With just under 6mins remaining, out came the green once more and Garcia pulled away from Edwards and De Phillippi to clinch victory for he and Taylor.

Telitz, who had moved up to third overall as the conditions got worse, got put back behind the two GTLM cars under yellow for the restart, but out came the yellows again almost immediately, when Bechtolsheimer smashed the Gradient Acura into a wall.

Then the order was jumbled by pitstops as drivers reached their minimum drivetimes. A poor pitstop for #14 Lexus dropped Jack Hawksworth down to fifth in class behind Mario Farnbacher in the #86 Acura, Pat Long in the Wright Porsche, Bill Auberlen in the Turner BMW and Townsend Bell in the #12 Lexus. Hawksworth passed his teammate and started trying to hunt down Auberlen who was setting very strong lap times while hassling Long for second. The Wright Porsche was now 7.5sec behind Farnbacher’s leading Acura with 55mins remaining, and by Lap 25 it was down to third as the charging Auberlen. It became inevitable that the BMW veteran would move to the front, and on Lap 31 he was through into the lead, and Farnbacher had outbraked himself and fallen to third behind Long – the pair of them a dozen seconds behind the Turner car!

With fewer than 30mins remaining, the Long vs Farnbacher vs Hawksworth fight for second was engrossing, the trio covered by barely more than one second.

Coming to the green flag for the final restart saw Hawksworth tag Farnbacher into a spin as they came out of the final chicane elevating the Lexus driver into third but he was given a drive-through penalty. That elevated Roman De Angelis, who had taken over the Aston Martin from Ian James at mid-distance, into third place, having just passed the other Lexus of Bell.

Bell held off Parente to the checkered flag, while Farnbacher salvaged seventh ahead of his assailant Hawksworth.