Home » Racing » Improving the racing at Indy: How it’s done, why it’s tricky

Improving the racing at Indy: How it’s done, why it’s tricky 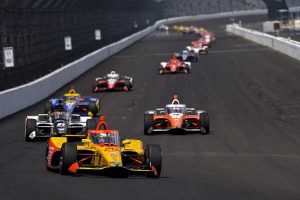 Indianapolis Motor Speedway is a temple of speed, but must also provide enthralling action. IndyCar’s head of aero development Tino Belli explains the changes for Indy in 2021 and the ethos behind them. By David Malsher-Lopez.

IndyCar’s re-introduction of a universal aerokit in 2018 saw the aesthetic appeal of the series take a monumental leap forward, and also brought an end to the days of countless meaningless passes in the Indianapolis 500. All the 500s that we witnessed in the DW12 era – 2012-’14 with its standard aerokit, 2015-’17 with the ugly manufacturer kits – were entertaining, without question. But the cars ran in packs, and the passes looked too easy: the guy in front – providing he didn’t throw a vicious block – pretty much had to give way to his challenger.’

In the DW12, no one wanted to lead for long and would relinquish position to save fuel. Here the ‘battle’ is between Ryan Briscoe’s Team Penske-Chevy and James Hinchcliffe’s Andretti Autosport-Honda in 2012.