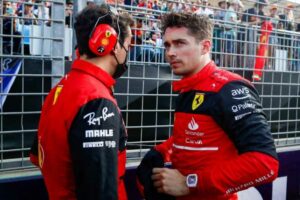 Charles Leclerc has spoken about being robbed of his 300,000 euros watch – saying the police investigation into the matter was not proving to be a “smooth” process.

The World Championship leader suffered the traumatic experience of having his Richard Mille watch stolen during an evening out in Tuscany on Easter Monday.

Asked by a group of people to pose for a photograph with them, Leclerc then found his timepiece had been removed from his wrist and he naturally reported it to the police.

However, it appears progress in recovering the watch – reported to be a special edition worth £266,000 (319,000 euros) – has been limited, although the 24-year-old insists the ordeal will not affect him as he tries for a third win in four races this season at the Emilia Romagna Grand Prix.

“It hasn’t been a great experience but I cannot say much more than that,” the Ferrari driver told reporters at Imola, quoted by Sky Sports.

“Everything is going on with the police and they are trying to find them. It hasn’t been as smooth as what I’ve read.

“But overall I am fine and fully focused on the weekend. It won’t hurt me for this weekend.”

What happened to Leclerc was remarkably similar to an experience Lando Norris had after attending the Euro 2020 Final at Wembley Stadium, except the McLaren driver was more the victim of a mugging than an opportunist thief.

Norris, speaking to Sky Sports, said the thought had crossed his mind to hire a bodyguard, although it is a measure he is reluctant to take.

“The people who do such things are not fans, are they,” said the McLaren driver. “It’s a tough and cruel world out there and there’s a lot of nasty people.

“You’ve got to be a little bit careful every now and then, and more when you have, I guess, the fame of Charles or you are in Formula 1.

“I don’t know if I’m at the phase of saying I need to have a bodyguard because I don’t think I do and I don’t necessarily want that…it’s a tough one.

“Of course I feel bad for him and I’ve been through similar things. I’ve been there. Not the nicest thing, but I’m sure he’s all right.”

Leclerc leads the World Championship by 34 points heading into the race at Imola, while Norris hopes to continue his upward trend having finished 15th, seventh and fifth this season.