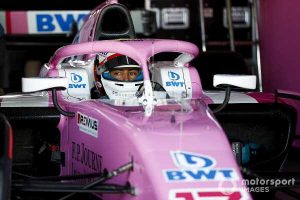 Ferrari Driver Academy protege Giuliano Alesi headed a damp free practice session for the third round of the FIA Formula 2 Championship at the Hungaroring.

Alesi, driving for the HWA Racelab team, was one of only nine drivers to get a flying lap on the board in conditions that remained too dry for rain tyres, and too damp for slicks.

The whole 22-car field ventured out at the beginning on slick Pirellis, but a spin for Marino Sato and then a spin-and-stall for Williams F1 junior Dan Ticktum proved how treacherous the track surface was.

Jack Aitken, Luca Ghiotto (on slicks) and Felipe Drugovich later headed out for sighter laps before returning to the pitlane.

It was 24 minutes before anyone got a timed lap completed, with Alesi’s HWA teammate Artem Markelov doing the honours – just after this, Alesi lowered the mark by 2.5 seconds.

Aitken went out later in his Campos Racing machine, but the rain appeared to be falling more heavily in the middle sector – he fell 1.174s short of Alesi’s effort, but had lost a full 2s in sector two.

Aitken was on a further lap when he went straight on at the Turns 6-7 chicane.

Apart from Ghiotto’s earlier in-out lap on slicks, one other driver tried running the medium-compound prime tyre for this weekend after the rain had properly set in – Ferrari junior and championship leader Robert Shwartzman took to the track in his Prema Racing machine, but did little other than prove how treacherous the conditions were.

The weather means that the field will take to the track for Friday afternoon’s qualifying session with no experience of a dry Hungaroring on the new 18-inch wheels, and will also likely affect the FIA Formula 3 qualifying session that follows the F2 free practice period.

David Beckmann led Lirim Zendeli in the dry F3 free practice session in the morning for a Trident 1-2, followed by Sebastian Fernandez and Jake Hughes.

Prema Racing, which has won both Saturday races this season with Oscar Piastri and Frederik Vesti, didn’t get a time in on the medium Pirellis being used this weekend after the session started on the hard rubber used in the previous round at the Red Bull Ring.