Home » How to build (your second) EnduroKA | PH Competes

How to build (your second) EnduroKA | PH Competes 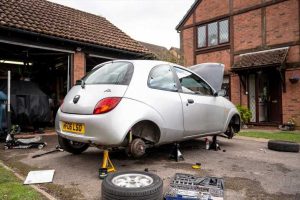 The first race is tomorrow. PH is (almost) ready

Our first race of the 2021 EnduroKA season is tomorrow, so you’d be forgiven for thinking you might have missed this article going live a few weeks ago. But, no – truth be told, the car still isn’t ready and we’ll be working on the finishing touches right up until qualifying. The phrase ‘cutting it close’ has never been so apt.

It didn’t help that we all took so long to commit to another year of racing. Faced with potentially more COVID uncertainty, job changes and another baby on the way, we were struggling to hold the team together. But when Sam Sheehan said he wanted back in, we finally committed and are back with a five-strong line up for 2021, including yours truly, RacingPete, Matt ‘Crash Bandicoot’ Dell, the mighty Sheemacher and our returning ringer Olly Lewis, now of Norton Motorcycles.

The hardest challenge of all though was finding a solid base car to start with. Experience has taught us that starting with solid foundations pays dividends and touch wood, that’ll continue with HF06 LSO, our almost mint 14k-mile example for 2021. It took us more than a month to find our car in 2019 and that was without navigating a pandemic – this year it took us nearly three. Every example we considered had an MOT history littered with rust issues and we couldn’t reasonably travel anywhere during lockdown. It was really touch and go if we’d be ready for round one.

With saved search notifications set up on almost every marketplace imaginable, Sam finally struck gold with a local dealer on our sister-site CarGurus. The dealer had just had the car in the day before in part-exchange and had barely had a chance to take photos of it before Sam had bought it using click and collect. Once again, we found ourselves with less than a month to get the car built – only this time we knew what we were doing. Kind of.

In an attempt to keep costs down, there are a very limited number of modifications you can make to your EnduroKA racer. The only parts you can change are controlled Gaz coilovers, Powerflex polyurethane bushes, brake pads and optional braided lines, Compomotive alloy wheels and Toyo R888R sticky tyres. The coilovers and R888Rs are new for this season, so we’re excited to see what impact they have on both the driving experience and lap times. Otherwise, that’s pretty much it apart from safety gear.

We salvaged everything we could from our last car including safety equipment, which comprises a roll cage, seat, harness and fire extinguisher. All must meet and comply with strict safety standards set by MSVR and Motorsport UK, so while the original seat that came in the car might be more comfortable for a 5-hour slog around Donington, it had to go. Matt Dell can testify how good the roll cage is at protecting the roof from caving in and, remarkably, ours didn’t have a mark on it from the incident last year.

Almost everything can pretty much be bolted onto the car on a driveway using nothing more than basic tools and axle stands, which we’ve stuck to throughout the last two years to prove that you don’t need a fancy workshop or motorsport lorry to (nearly) win races.

Our first job was to rip out the old interior and get rid of any unnecessary weight before we dropped our Ka off with Moores Motors in Wokingham to weld in our roll cage mounting points. Moores fitted our cage first time around and offers arrive and drive packages for EnduroKA, so they know their way around them rather well and have lost count of the number of cages they’ve fitted.

Moores also welded in their latest seat mounting frame for us, allowing our Motamec bucket seat to slide backwards and forwards, while keeping it as low as possible. You can run with the factory steering wheel if you really want to save money, but we opted for a quick-release boss setup with a smaller suede Motamec steering wheel.

We wired up our rain light and battery cut-off switch, then plumbed in our fire extinguisher and recycled our cut-off panel where the head unit used to reside, so they’re all within reach. Fingers crossed the latter two will never need to be used. Our Aim Solo 2 data logger takes its power from the OBD port and our GoPro we use for video footage is powered from the 12v socket, which were just about manageable for me to connect at my novice level of electrical jiggery pokery.

Given that no engine modifications are allowed, there isn’t much we could do in the engine bay other than regular servicing. Apparently the gear ratios in the cars with air-conditioning are better suited to track driving than those without, so we made sure we bought a car with air-con and have since stripped it out. If you do this, you’ll need a non-air con auxiliary belt, which is easy to swap over once you’ve worked out how to route it through the pulleys.

We finished plumbing in the fire extinguisher and battery cut-off switch that were both routed through an existing grommet into the passenger footwell – and that’s it. If you’re playing a game of spot the difference in our photos, you’ll have noticed we’ve swapped our bonnet and boot lid for black units. May sound a little odd, but it’s all part of our livery plan and we handily had a donor car sat under a sheet in Pete’s garden after Matt Bird’s little mishap at Snetterton last year.

Having fitted all of the Powerflex bushes on our first car, I was responsible for fitting the new set, as we weren’t able to save the original ones from the scrapheap. Fresh front wishbones were pressed up front, and I had a nifty tool from the first build off eBay to fit the rear beam bushes in situ without having to remove the beam completely. I’d pretty much had the whole lot done in the time that Pete was still scratching his head trying to work out what parts we had to strip off the front dampers to re-fit onto the coilovers.

Once we’d worked that out, it was dead easy to swap out the old suspension and get the shiny new Gaz coilovers in place which have replaced the old Bilstein damper with Eibach spring setup that we’ve been running the last two years. The intention is that the coilovers can be refurbished rather than replaced, so they should work out more cost effective in the long run.

There’s no height adjustment and only the rear dampers have rebound adjustment, so other than toe and tyre pressures, there isn’t much you can do to alter the car’s setup. They certainly look the part though with flashes of gold and purple dotted around the car and there’s something very satisfying about fitting fresh suspension and polybushes.

The Goodridge braided brake lines are optional, but we didn’t fancy hedging our bets on a set of 15-year old rubber pipes so we fitted a fresh set along with the control Mintex M1144 pads up front. The Ka has a simple two-pot caliper up front and drum brakes at the rear, which might not sound like much, but given the minimum weight limit for car and driver is 950kg, they’re more than up to the job.

A stud and nut conversion is needed for the Compomotive alloy wheels, which does require having fresh bearing pressed into the front hubs, so Moores Motors were again our saviours and took care of that for us while the cage was being fitted.

Due to a combination of national lockdowns and the Suez Canal blockage, there has been a short supply of the new control Toyo R888R tyre. It was possibly the only thing I was proactive enough to order in time, so we managed to bag two sets. You really need at least six wheels for tyre changes mid-race, but we opted for eight.

For those not fortunate enough to secure R888Rs, MSVR are allowing other teams to run Yokohama Advan A050s in emergency measures. We’ve no idea which tyre will be better, but it could make for a more interesting first race.

Refuelling is done using Tuff jugs, so we had to remove the fuel filler neck and cut out some plastic out so that the adaptor can fit properly. We’ll be heading to the race armed with our trusty socket set and axle stands, high-vis jackets, tyre pressures and pumps, plenty of water and snacks, nowhere near enough spare parts and, let’s not forget, a face mask and some hand sanitiser.

No doubt I’ve missed a few bits – although let’s just hope that’s just from this write up and not the actual build itself. Both have felt equally rushed, but look at it this way: if we’re able to cobble a car together between us, then anyone can do it.

As we’d managed to salvage most of the parts we needed from our old car, we weren’t starting from scratch. Had we been, we estimate it would have cost us £8,166 as a bare-bones new build. That includes buying the car, taxing and insuring it, all of the control and safety parts, plus two sets of alloy wheels and tyres. We could have done it cheaper with different parts and at £1,750, our car was expensive but we’d rather pay handsomely for a clean low-mileage car than buy a £500 rotter. Assuming it’s in one piece at the end of the year, we’re expecting it to be worth around £6,000 – £6,500.

Anyone that’s interested in a full break down, feel free to drop me a PM and I’ll happily send over a spreadsheet of our build cost and associated running costs from the full season in 2019.

We’d like to say a special thanks to MSVR and the EnduroKA team, Powerflex, Moores Motors, Polleysport, MSAR for servicing our fire extinguisher so last minute and Burton Power for bending over backwards to help us get everything done is such a short timeframe. Wish us luck!