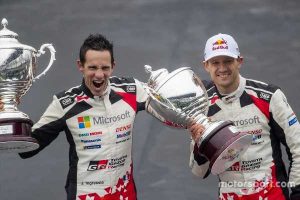 The 2020 World Rally Championship ended in heartbreak for Britain’s Elfyn Evans as his 14-point advantage in the drivers’ title race was whisked out from beneath him by a patch of Italian snow. Thus Sebastien Ogier claimed his seventh WRC title as Rally Monza joined the calendar for the first time.

Tensions were high when the trucks unloaded in the historic royal park and there were suggestions that some teams were rather less willing to be there than others. Event organisers had insisted that the itinerary would be fully compliant with the COVID-19 legislation in place at the time, but it was sobering to know that Italy had suffered its most grievous toll of the pandemic so far on the opening day of the rally, with 993 lives lost.

Eight long weeks had passed since the previous round in Sardinia, throughout which time the expectations of British rally fans had hung over Evans like the Sword of Damocles. The nation had meanwhile saluted the 25th anniversary of Colin McRae’s euphoric WRC title and paid fulsome tribute to Richard Burns 15 years after his tragic loss to cancer, which would have served only to remind Evans of exactly whose boots he was expected to fill. Sure enough, he managed to uncharacteristically reverse his Toyota Yaris into the barriers during shakedown.