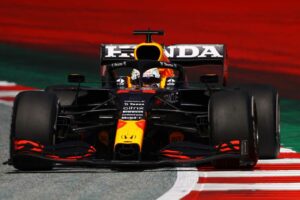 It was never a contest really. Max Verstappen led from the pole Sunday in the F1 Styrian Grand Prix in Austria and never looked back winning by a margin of 35.743 seconds over Lewis Hamilton. And that gap was after he slowed prior to crossing the line in a bit of showmanship.

Using a one stop strategy Verstappen led every lap and won his second consecutive grand prix a week after his triumph in France, the first time he’s done that in his career.

“Straightaway I felt a good balance in the car,” Verstappen told Sky Sports. “(It) was good to manage the tires from the start. We just kept on going, hit our lap times.”

As has been the story three races, Hamilton had nothing for Verstappen. All the seven-time champion could do was try and limit the damage in the points. Mercedes opted to pit him on the penultimate, a free stop that put Hamilton onto a set of soft tires and gave him one shot at the fastest lap of the race. Hamilton was able to deliver and score a championship point.

“It was a bit of a lonely race really,” Hamilton told Sky Sports. “I was trying to keep up with those guys [Red Bull] but they’ve made some big improvements over the last couple of races.”

Valtteri Bottas was able to provide a bit of consolation for the Mercedes team. After an embarrassing spin in the pit lane Friday, Bottas was penalized and forced to drop three spots on the grid and started fifth. He managed to make up two spots and hold off Red Bull driver Sergio Perez on the last lap and claim the final spot on the podium.

“From where I started, this was the maximum today,” he told Sky Sports. “Damage limitation. It was getting a bit close at the end [with Perez] and I’m glad we could defend as it’s been a while since I’ve been on the podium.”

Behind fourth place Perez, Lando Norris was fifth for McLaren. He finished ahead of the Ferrari’s of Carlos Sainz and Charles Leclerc who were able to score points for the team after a disastrous French Grand Prix that left them out of the top 10.

Two of the notable DNFs came from Pierre Gasly who was forced to retire with heavy suspension damage after lap 1 contact with Leclerc. George Russell was running inside the top 10 for most of the early part of race, but a power unit issue forced him to the garage on lap 36 of 71.

With a comfortable lead in the standings Verstappen should be considered a favorite to remain atop the standings, at least for the foreseeable future. Especially with the series set to race at the Red Bull Ring again in a week’s time.

“I’m looking forward to it,” Verstappen said. “I’m confident we can do a really good job again.” 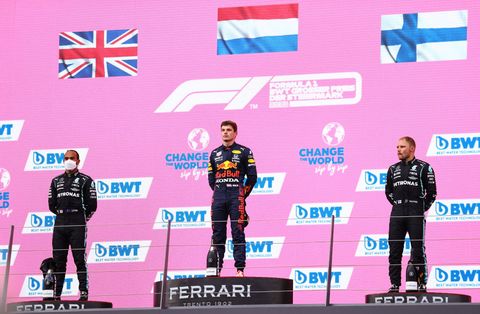