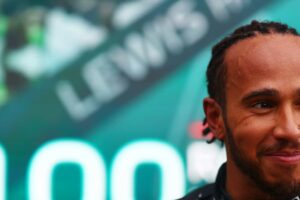 It was hero or zero stuff at the Sochi Autodrom.

An enthralling F1 Russian Grand Prix, triggered by an unusually sculpted grid, was set to come down to a straight fight between Lando Norris and Lewis Hamilton. Norris was pursuing win No. 1, while Hamilton was chasing victory No. 100. The rain gods, however, had one final throw of the dice.

On a grim day adjacent to the Black Sea the band of showers that threatened for most of the afternoon began dousing the middle sector of the lap over the final half dozen of the 53 laps remaining.

Neither leader Norris no chaser Hamilton wanted to come into the pits for intermediate tires, but the experienced Hamilton, at the behest of his Mercedes team, eventually pitted with just two laps to go. Leader Norris stayed out.

Norris was gifted a near half-minute lead when Hamilton returned to the track, and stayed out an extra lap, but as the rain swept further across Sochi Autodrom it was clear that Norris was fighting a lost cause.

Norris got to Turn 5 on lap 51 of 53, didn’t reach the corner, and spun into the soaked run-off. Through went Hamilton, while after a desperately slow half-lap Norris had to pit to take on the Intermediates, and eventually came seventh. It paved the way for Hamilton to reach win No. 100, with an unexpected 52-second margin over Max Verstappen, in a topsy turvy Grand Prix.

Hamilton had been seventh on the opening lap, but bided his time to emerge in second, hounding Norris, when the rain hit.

Reaching 100 victories is an extraordinary achievement for Hamilton. Only 73 drivers in history have even reached 100 starts. Hamilton’s first victory came in Canada, in 2007, while last October he surpassed the previous benchmark of 91 wins held by Michael Schumacher. Third on the list is Sebastian Vettel, on 53. Hamilton is contracted with Mercedes through 2023, giving him ample opportunity to raise the tally further.

[email protected] and all the other 💯x @F1 winners. pic.twitter.com/UbHvpDRJNa

“It’s a magical moment,” he said. “I could have only ever dreamed of still being here and having this opportunity to be able to win these races and drive with such phenomenal talents this late in my career, and to continue to be building with Mercedes, I’m so proud of everything we’ve done not only on-track but also off. Yeah, this is just a special moment.

“I was like ‘(I want to) stay out, I’ll try and catch him’, then they called me in and I was like ‘he’s right there I’ve only got three laps or so’, I’m not going to catch up that time, no way, I wasn’t convinced, but the next lap it rained more and I was more convinced there so I came in [for wet tires]. I put all my faith in my team, they called me in, I believed them, we did a great job in understanding where the rain was coming, that it was going to get worse, and they were 100% right.”

For the 21-year-old Norris, his day will come. He has been one of the standout stars in the 2021 season and was just a few laps from glory. On another day the rain might have relented, making he and McLaren look like heroes, but not this time.

“I could have won the race and I didn’t, so I’m not going to be happy,” he said. “It’s the way it is, I made the decisions, we made the decisions, they were obviously wrong at the end of the day. A tough one. For some reason we didn’t see how much more rain was suddenly going to come. I didn’t get told that, I didn’t know about that, and I made my decision based on the information that the drizzle was going to remain a drizzle and not pouring with rain, so, yeah, I don’t know, it just was all going so well so it makes it feel even worse. Not the result we wanted in the end.”

It was quite the comedown after the high of a maiden pole on Saturday, and McLaren’s first win in nine years in Italy, but there was solace from a complimentary Hamilton.

“He’s so young, he’s got so many more wins up ahead of him, he was doing a fantastic job, he’s doing a great job at McLaren,” Hamilton said.

It was a good day for Verstappen. He started last after an engine change and made early gains, though hit a likely limit when he got to seventh. But the late rain provided an unexpected fillip and Verstappen rolled the dice by switching early to Intermediates. He rose from seventh to second, limiting the damage in the championship on a weekend in which he and Red Bull feared a worse result.

Carlos Sainz, who led early on, was an excellent third for Ferrari, taking a position that had been destined for Sergio Perez pre-rain.

“I’m super happy of course to be second,” said Verstappen. “If you would have told me this morning I’d come second today I wouldn’t believe you.”

The result means Hamilton heads to the next round in Turkey in the lead of the standings, though Verstappen is a mere two points behind.