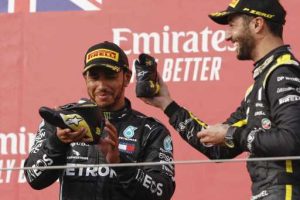 Downing a shoey with Daniel Ricciardo at Imola, Lewis Hamilton has finally answered that question we’ve all been wanting to ask, what does a shoey taste like.

Hamilton clinched the victory in Sunday’s Emilia Romagna Grand Prix, joined on the podium by his team-mate Valtteri Bottas as well as Renault’s Ricciardo.

It was Ricciardo’s second podium of this season but while at the first, Russia, he forgot to do the all-important shoey, this time he remembered.

Not necessarily a good thing for Hamilton.

The Mercedes driver sportingly downed a shoey with the Aussie, drinking champagne from Ricciardo’s race boot – the one he had just removed from his sweaty foot.

One for Danny and one for Lewis 🥴

He added: “It definitely didn’t taste great. I mean I don’t really like champagne as it is, but it definitely tastes worse.

“But what’s positive is that Daniel’s mum thinks I was a good sport, so I’m grateful for that.

“I think Daniel had said that I’d once said never, that I would never do it. So there’s a lesson – never say never.”

Hamilton’s victory on Sunday not only extended his record to 93 race wins but also played a role in handing Mercedes a seventh successive Constructors’ Championship.

The Brit was full of praise for everyone at Mercedes, the “unsung heroes” who don’t appear on the TV.

“It was a good moment… I don’t know I’m just feeling incredibly proud of this team and you know, to live in a moment where we see a team so successful and to be a part of it is quite phenomenal.

“Something that it the real honour of my life, working for this team and for all these people back at the two factories, Brixworth and Brackley.

“You know they really are the unsung heroes that are not on TV every weekend. They’re the guys that are working flat out every day during the weeks, crazy hours, to build and to innovate, to raise the bar, so that we can come here and do what we have done today and this year.

“I really don’t take it for granted that we have had this success. People could say ‘oh, you must be used to it’, and obviously maybe the fans are used to it, but from working inside the sport, you never get used to it.

“From tomorrow we’ll be focused on what’s next. We’ll be focusing on how we can be better. On Wednesday we’ll be having a big team meeting, trying to understand what could have been done better.

“We’ll have an analysis of what the next car looks like and what’s needed to raise the bar with the engine, with the driveability, with the ride, with tyre usage, all these different things.

“That’s because at the core of this team is some real heart and so a big thank you to everyone.”