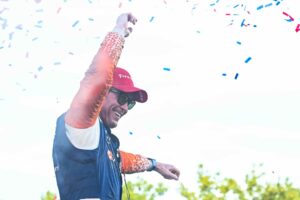 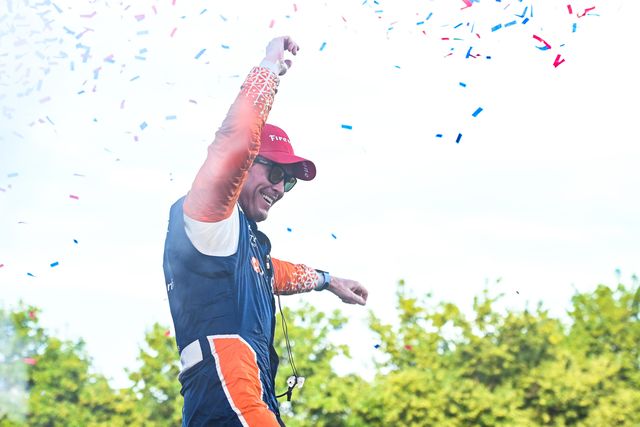 You might say Nashville was transformed into New Zealand East, at least for one day.

In so doing, Dixon passed Mario Andretti and moved into second place all by himself on IndyCar’s all-time wins list with his 53rd career win. Dixon is now just 14 wins behind all-time wins leader A.J. Foyt, with 67 wins.

But more time-sensitive, so to speak, with his second win of the season, Dixon is now in second place in the IndyCar point standings, just six points behind series leader and Australian native Will Power. Dixon is hoping to earn his seventh IndyCar championship, which would tie him for most IndyCar titles with Foyt. 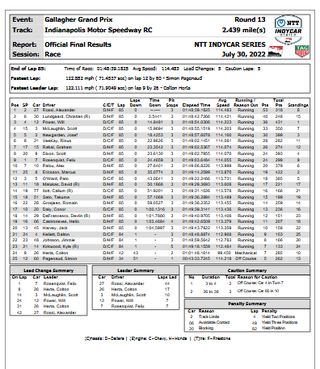 “I knew the car was super-fast, we proved that in the warmup,” said Dixon, who started 14th. “I think we did 45 or 50 laps on the last set of tires, the last stop we didn’t even take tires on the last stop. Man, Nashville is just so awesome.”

“We were worried about (McLaughlin) because of the standings at the moment, he was super-fast as well and honestly he had fresh tires. I was a bit of a sitting duck. If there was another lap or two more, it would have been tough (to win). Congrats to him on a great weekend and hopefully it was good for us for points.”

McLaughlin agreed with his fellow Kiwi, Dixon, lamenting that the final outcome would potentially have been different if he had just one thing go his way:

“One lap,” McLaughlin said when asked what might have made the difference in the race. “We were alongside crossing the finish line. Man, we were 16thon that last pit exchange, had an awesome restart. It was unreal. Good on fuel, good power, just fell short at the end. But congrats to Scotty. I’ve always dreamed of racing him to the finish.

“I hate coming in second. It is what it is. I learned a lot today. It was a great points weekend. We’ll keep pushing the last three races.”

Palou had his best showing since it was revealed on July 12 that he had signed with McLaren Racing for next season, which prompted his current team owner, Chip Ganassi, to file a breach of contract lawsuit against him.

“Any day you’re on the podium is a good weekend,” Palou said. “It was a tough day. We got some points back for the championship.” 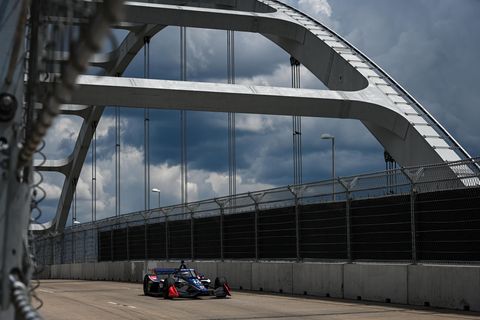 Another Year Another 8 Cautions

In a sense, you can’t blame some folks who attended the Big Machine Music City Grand Prix in Nashville if thought they were coming to see an IndyCar race, but they wound up watching a demolition derby.

Just like last year’s race, there were eight caution periods, including one red flag race stoppage, for 36 laps. That means nearly half of the 80-lap race on the temporary street course was contested under a yellow caution flag.

Nearly a quarter of the drivers in the 26-car field were involved in crashes before the halfway point of the race: Simona De Silvestro (her third and likely final start of the season for Paretta Autosport), Will Power, Dalton Kellett, Pato O’Ward, Graham Rahal, Devlin DeFrancesco and Takuma Sato.

All of them, with the exception of Power and Rahal, saw their days ended early.

Rahal’s team was able to get him back on track on Lap 54, but he didn’t even complete one lap when he slid into the wall and then was hit from behind by Rinus VeeKay, who had just exited the pits after service. 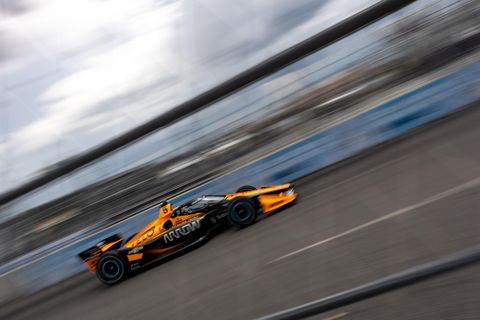 The musical chairs of the NTT IndyCar Series championship battle definitely hurt one of the seven drivers still in contention during Sunday’s race.

Pato O’Ward, who came into the race in fifth position, 46 points behind points leader Will Power, was involved in a crash with Graham Rahal on Lap 27 of the 80-lap event.

As for Rahal, he ran into the back of O’Ward after another driver ahead of the two of them checked up.

Here’s how Rahal explained the incident:

“The most frustrating part for me is I don’t understand the check-up. It seemed like somebody ahead had a problem and I hit Pato exceptionally hard. I’m really not sure what the checkup was, to be honest. I’m sorry to Pato. For us, it broke the rear tow link. It’s disappointed but these are racing incidents that happen.”

Here’s O’Ward’s point of view on the incident:

“I don’t know who caused the check-up,” O’Ward said. “I saw the cars slowing down so I had to get on the brakes. If not, what Graham did to me, I was going to do to Will. Sadly, there’s only one way to look at it. It was a big enough hit to break probably a gear or something in the gear box. I couldn’t get it into any gear and that’s our day.” 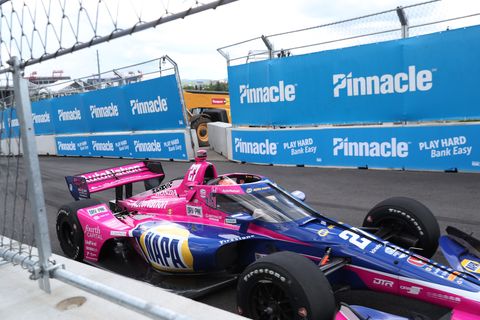 Two drivers were involved in early crashes, but were able to get going after repairs were made on pit road and wound up with decent finishes – although it’s likely many didn’t think either driver would salvage a good showing at the time.

Last weekend’s winner has spun and caused a full course [email protected] is now a lap down.

Rossi bounced back from his early mishap Sunday to finish a very strong fourth, just barely missing a podium finish.

And then there was Colton Herta, who dominated last year’s race at Nashville before crashing out with six laps to go.

Herta looked like his day was over very early with another crash at Nashville, but his team was able to quickly repair front end damage and he was able to cycle back for an impressive fifth-place finish, right behind Rossi.

Contact between Colton Herta and Dalton Kellett sends Herta into the tire barrier!

Not the start the No. 26 team needed today. #INDYCAR

“I thought if we could get our lap back, we seemed to still have a fast race car even with some of the damage and we could move forward,” Herta said. “I really have to give it to the guys. They did such a good job in the pits. Both our pit stops, we gained so many stops.

“I think our second stop, we gained two or three stops that put us up into eighth and then we were able to battle up into the top five. I’m happy with how we came back, not only starting from the back but also being a lap down. It doesn’t happen too often, so I’m real happy how it went.”

NOTES: Jimmie Johnson spun coming off the bridge with eight laps to go, ending his day. It marked the second time he’s wrecked in Nashville, also wrecking big and hard in last year’s race as well. Johnson finished 18th. Johnson has now finished 18thor worse in 20 of his 26 IndyCar starts to date, including Sunday. … Will Power had problems with the dashboard lights on his car, so he had to do a lot of things manually or by feel. Power ended up the last driver on the lead lap, finishing 11th. … Scott McLaughlin gave his parents, Wayne and Diane McLaughlin, a great going away present. They return to their New Zealand home after several weeks in the U.S. watching their son perform in IndyCar racing for the first time. During their three-plus weeks in the U.S. and Canada, they watched their son win at Mid-Ohio, finish ninth at Toronto, 22nd in the first Iowa race, third in the second Iowa race, fourth at Indianapolis GP and runner-up on Sunday. … During the red flag race stoppage late in the race, McLaughlin came over his team radio and thanked his team members, saying it was the best race car he’s ever had. … Sunday marked the conclusion of five races in a 22-day period. Now, only three races remain on the schedule: August 20 at Gateway (suburban St. Louis), followed by Portland (Sept. 4) and the season finale at Laguna Seca (Sept. 11).