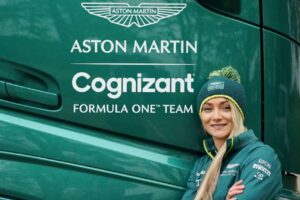 Jessica Hawkins had a pretty cool job: she was a stunt driver for the live show version of the Fast & Furious—a sort of career goal if you love doing ridiculous things with cars. Filling up an arena with tire smoke wasn’t exactly what she set out to do, however, as Hawkins’ goal was to become the racing driver of a single-seater race car.

It’s notoriously hard to climb the ranks of junior motorsport. It’s a tough, demanding, athletically challenging and mentally stressful sport, but the biggest barrier has more to do with money than skill. This is where Hawkins found herself in 2017, but after getting a once-in-a-lifetime call, she kept her foot down and now she’s part of the Aston Martin Formula One team. 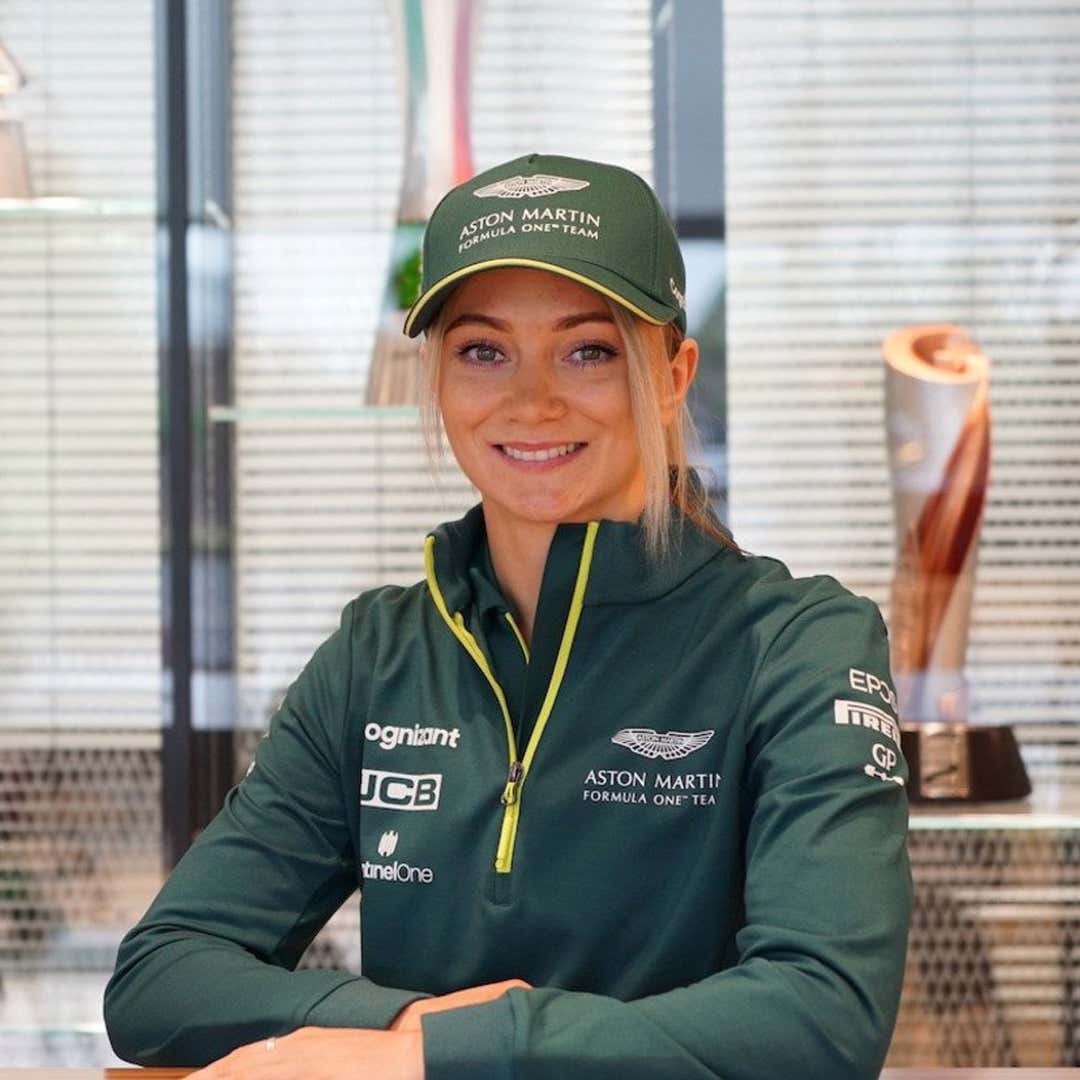 Running out of money to go racing is easily explained by just not having a completely ridiculous amount of money. Hawkins told me, “It was always a struggle for us to find the budget to go racing. And it got to the stage where we won the championship in what we were doing, but to get to the next level was another lot of money, especially when we couldn’t even afford to do what we’d been doing that season.”

With her racing days potentially over, another opportunity came along.

“A friend of mine actually tagged me on a Facebook page that said they were looking for a female with good car control,” she explained. “Didn’t say what it was for or anything like that. They just said that’s what they need. So I sent my CV.”

“They then said I needed to be able to drift, do donuts, etc., all of that kind of stuff and although I didn’t lie I just …made them aware that I probably had the skills that they were looking for and just had never implemented them in that way before. So I kind of, I guess, almost blagged myself, an audition,” she added.

“Basically, it was they were looking for drivers and they’d already found on the males that they were after, but they were still struggling to find a female. And they’d literally flown people in from around the world, ten of these females that they chose and arrived at the audition. I got taken down to the last three or four, I think it was, and then had to come back in a couple of weeks later.”

“I want to say I must’ve completely nailed the audition because I ended up getting the job and I was against some real pros in the stunt world, in the drift world,” she said. “So I got the job and then had a year and a half on Fast and Furious Live, which was the most amazing experience, I couldn’t even pay for that experience and that was my nine to five job, really, just drifting cars and doing stunts and that’s where I learned.”

Even if dropping out of racing isn’t any driver’s favorite moment, Hawkins was good at stunt driving, landing herself roles in various films just from experience gained on the live show. From things like setting the world lawnmower speed record to hurling Bond cars around in 007’s No Time To Die.

At only 24 years of age, Hawkins doesn’t necessarily embody whatever stereotype of a stunt driver you’d imagine. Barely ever seen without her iconic bobble hat, she’s funny, a little bit shy, and well, still very racing-driver-y. She said the same skills translate between racing and stunt driving, just carried out differently.

“I stick by what I often say—it’s the same kind of skills that you need, but you just use them in a completely different way. It really is down to fact that in racing you’re competing against everybody that you’re driving with whereas in stunt driving, you’re working with the other drivers, with the other people around you. So there’s a lot of different skills used within the actual driving as well. So same skills just used in a different way, I think.”

Racing drivers are notoriously particular about how they set up or fine-tune their cars but that’s less possible in the film world, where you’re there to work with what you’re given.

“If it’s a big driving scene you’ll have rehearsal week or rehearsal two weeks leading up to, in which you get to test the car and the scene and stuff and there are no big changes to be made,” added Hawkins. “If you’re doing some drifting, as long as the rear diff locks and you’ve got a hydraulic handbrake or something similar you should be able to do something quite cool. Sometimes you just have to jump in and do it.”

For full disclosure, the whole reason I originally requested an interview with Hawkins. was that we’d ended up in a transatlantic office discussion about whether stunt drivers prefer automatic or stick-shift cars. Hawkins prefers stick. 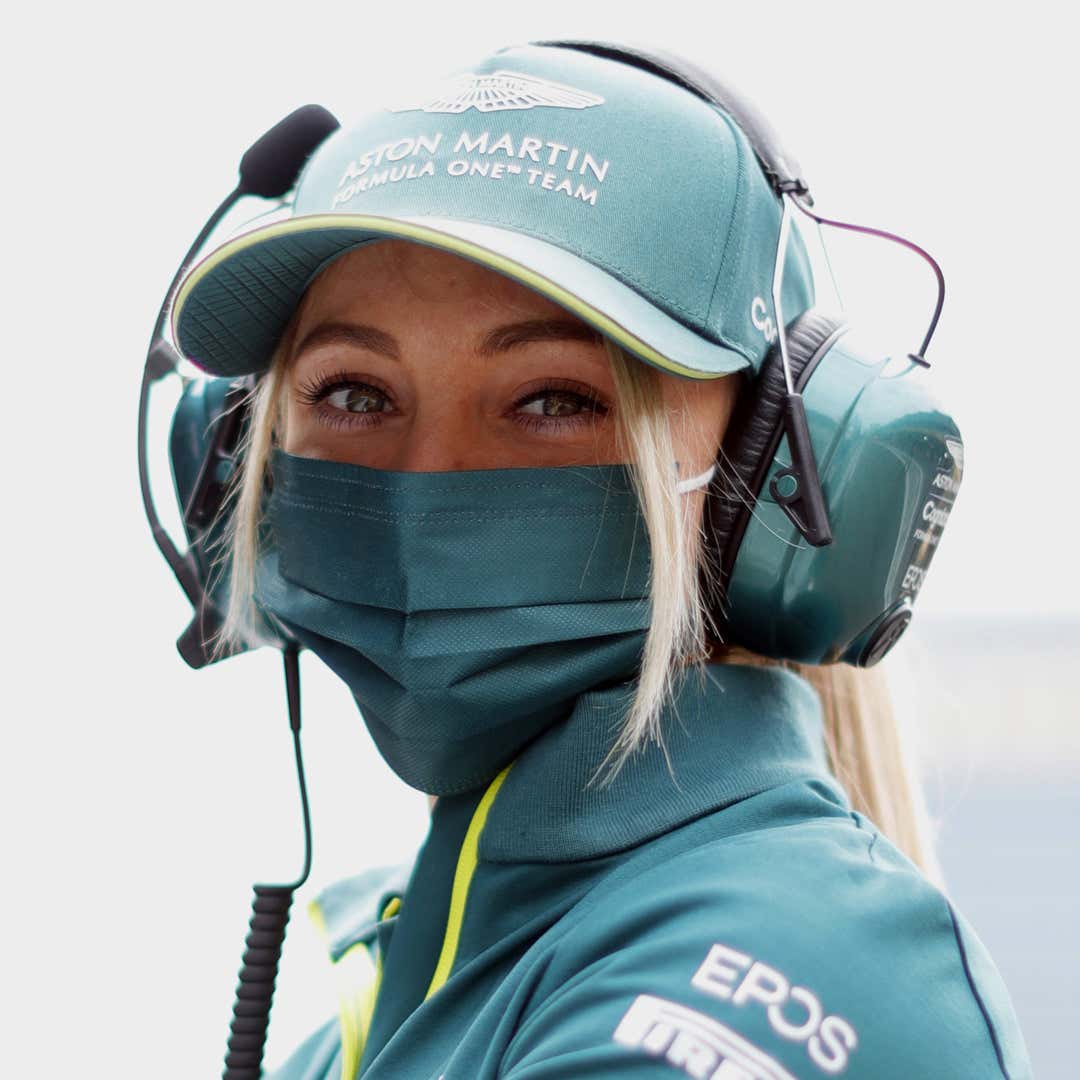 Stunts aside, though, Hawkins is back racing. She competed in the 2019 inaugural W Series season and qualified to carry on in this year’s rounds. Not having driven an F3 car before and having been out of racing, she didn’t know how she’d fare against competitors that hadn’t had their careers interrupted but wound up 11th and with more racing opportunities.

“It’s only really W Series that brought me back into racing as far as I was concerned, unless I’d won the lottery,” she said. “The series funds their drivers fully, pays them for racing, and awards prize money—creating opportunities that just don’t exist in the majority of junior ladders. I didn’t think I’d ever race again, so I’ve got a lot of thanks to W Series for bringing me back.”

Hawkins raced in the final rounds of Jaguar’s single-make I-Pace eTrophy last summer, alongside Formula E’s deliriously heatwave-stricken, nine-day finale. But by far her biggest opportunity so far is signing for Aston Martin as a team ambassador.

“Yeah, I mean, to me, obviously, it’s a dream come true. This is something that you dream about when you’re little and never did I ever think that anything like this would ever happen,” she said.

It was Hawkin’s first weekend trackside with the team at the Azerbaijan Grand Prix, when I spoke to her and she said, “Everybody has been so, so welcoming, even down to Seb [Vettel].”

“I went on track walk with him yesterday. I mean, that’s crazy. Really crazy to think that would ever happen. But he’s been really helpful. Everybody’s been very welcoming.”

Hawkins’ role initially comprises of media duties—although that’s nothing to be sniffed at, there’s plenty of drivers scrapping for those roles, like former F1 driver Esteban Guttierrez at Mercedes. And she said she’d “obviously jump at” the opportunity for simulator work and getting further embedded within the team, hoping to stay there for the long run.

Got a story tip? Email me at [email protected]