On April 4th 1982 Andrea de Cesaris started the US GP West in Long Beach from the only pole position he would ever earn.

Had he converted it into victory, the Italian’s career might have taken a different direction – but not only did he lose the lead to a brief fit of road rage, he ended the afternoon in the wall, as he so often did.

Instead that race morphed into a memorable first comeback victory for Niki Lauda, by a stroke of fate the man who had replaced de Cesaris at McLaren.

The win vindicated the decision by Ron Dennis to lure Lauda out of retirement, and set the Austrian on the path to his third World Championship a couple of years later.

De Cesaris would start 208 Grands Prix in a career that stretched from 1980 to 1994, and encompassed spells at no fewer than 10 teams, namely Alfa Romeo, McLaren, Ligier, Minardi, Brabham, Rial, Scuderia Italia, Jordan, Tyrrell and Sauber.

Try as he might, he would never fully shake off the wild reputation that he created for himself in his first full season with McLaren in 1981, when a series of accidents tested the strength of John Barnard’s composite MP4 chassis, along with the patience of the team.

Long before the end of the season Dennis launched his ultimately successful plan to persuade Lauda to come on board, and thus there was no place for de Cesaris in 1982. 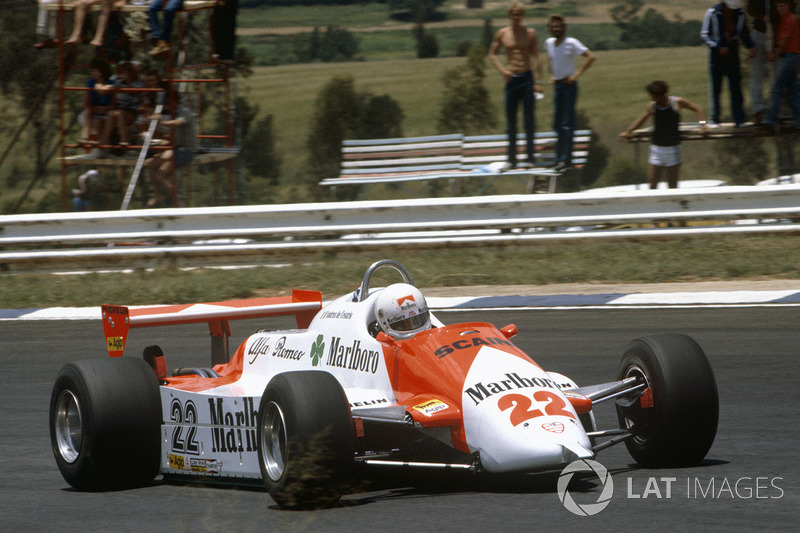 However de Cesaris always had Marlboro support behind him, so it was no great surprise when he was moved across to the cigarette company’s other team, Alfa Romeo. Indeed he had driven his first two F1 races for Alfa at the end of 1980, so he already felt at home in the camp.

The big change at Alfa since then was the arrival of former Ligier chief designer Gerard Ducarouge, who had an immediate impact on the hitherto ramshackle outfit. He came up with a new 182 carbon chassis, and mated to the proven V12 – a torquey engine that was always good on street circuits – it was a decent package.

De Cesaris and teammate Bruno Giacomelli had the old car for the opening race of 1982 in South Africa, and the first outing with the new model in Brazil was inconclusive.

However at the third round at Long Beach, the Alfa was quick from the off, with Giacomelli second in the first free practice session, and de Cesaris sixth.

Thanks to some issues they were only 10th and 12th in Friday qualifying, but when it mattered on Saturday, everything fell into place for de Cesaris.

In the closing minutes of the final qualifying session Lauda put in a typically neat and tidy lap to apparently secure pole, and TV crews were already gathering around him when there was an unexpected change at the top of the timing monitors. De Cesaris was on pole, 0.120s ahead of the man who had replaced him.

When he returned to the pitlane he was in tears as a huge celebration erupted in the Alfa camp, and the emotions for all concerned were clear to see. His prize haul included a special trophy, $1000, a bottle of brandy, and a razor…

It was a big moment for Ducarouge, vindicated after being sacked by Ligier the previous year. And the Marlboro folk were also happy. Not only had their faith in Lauda had been justified, and now they had two competitive cars at the front of the field.

There was a brief panic when it emerged that an unmarked tyre had been used on the pole-winning car – de Cesaris had brushed the wall early in the session and had required a replacement – but a marshal admitted that it was his fault, so all was well.

At 22 de Cesaris was the youngest pole man ever, a record he would hold until it was beaten by Rubens Barrichello in 1994.

“I don’t want to think about the first lap,” he noted. “Otherwise I won’t sleep.” 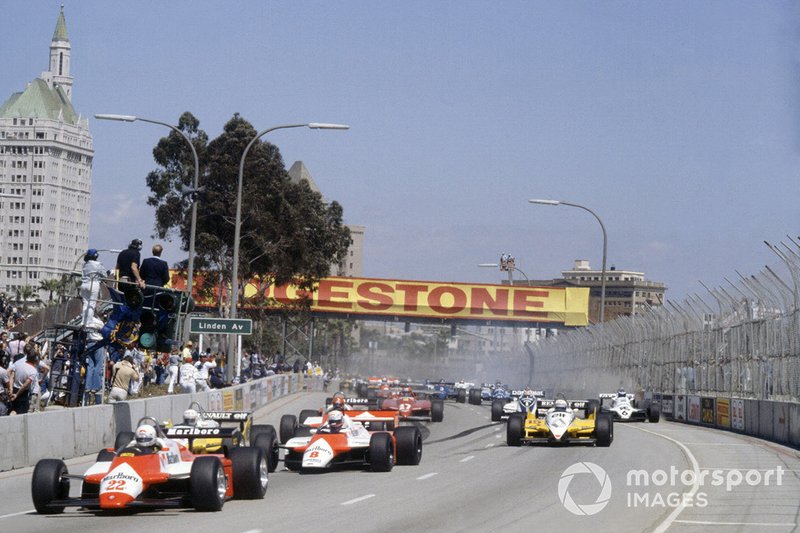 He now had to get the job done in the race. Lauda was determined to get himself into the lead – but he was well aware of his rival’s reputation, and didn’t want to get tangled up with him on the first lap.

Lauda even took the trouble to speak to his rival before the race in an attempt to ensure that there would be no first corner fireworks, making it clear that if he couldn’t get the lead off the line, he wouldn’t try anything at Turn One.

“In that case I’ll have to be patient and not try to overdo things,” he told journalist Heinz Pruller before the start. “Above all, there’s no question of taking chances with de Cesaris.”

In the event the pole man made a good start and drove a faultless first lap, while from third on the grid Renault’s Rene Arnoux slipped into second place.

Lauda thus ran third initially, ahead of Giacomelli. On the sixth lap the second Alfa driver, keen to get a move on and perhaps concerned that his teammate was escaping up front, made a successful passing move on Lauda – and promptly ran into the back of Arnoux, putting both himself and the Frenchman out of the race.

Lauda was now a safe second. The gap to the leader opened up to 4.8s, then came down to 2.8s on lap 13. On the next lap de Cesaris lost some time when he came up to lap the Arrows of Brian Henton. Suddenly from nowhere Lauda was right with him – and the pressure was on.

De Cesaris then caught Raul Boesel’s tardy Rothmans March at the new chicane that had been installed early on the pit straight. He almost came to a halt behind the Brazilian in the first right hand part, then tried to go round the outside in the left hander that followed, only for Boesel to stick to the line and force de Cesaris to stay wide.

He finally passed him coming out of the final right-hand part of the complex onto the straight, but he was off the ideal line, and had lost momentum – and was busy telling Boesel exactly what he thought.

“De Cesaris overtakes the slower car and shakes his fist at the driver,” Lauda said in his autobiography To Hell and Back. “I see him raise his hand in a threatening gesture and I say to myself: he should be changing gear now.

“I hear the ugly whine of his rev limiter as it hits 11,000rpm. I pull out past him, giving him a wide berth. After all, you have to watch yourself when you pass someone who is so busy shaking his fist that he forgets he has to change gear.”

Lauda blasted past on the right and was able to stay in front at the end of the long pit straight. It was the first time he had led a race on the road since Sweden 1978 with the Brabham fan car.

Thereafter he edged away from the Alfa, as de Cesaris – still in only his 19th Grand Prix – made heavy going of getting through traffic.

Nevertheless he was still running a strong second when on lap 34 he noticed some smoke in his mirrors, possibly caused by burning plastic around the brakes.

Distracted, he crashed heavily, wiping the right hand side off the car, and writing off the new chassis. The frontal damage was such that his right boot came adrift as he climbed out of the smoking wreck, and he paused to put it on again. It was a sad end to his day, but the consensus was that he’d given his reputation a boost – he was far from the only driver to hit the wall.

Lauda meanwhile cruised around in front in typically unruffled style, backing off in the late stages to preserve his equipment. He still had a 14.6s advantage over runner-up Keke Rosberg. With victory in his third race after a two-year break, Lauda was back. 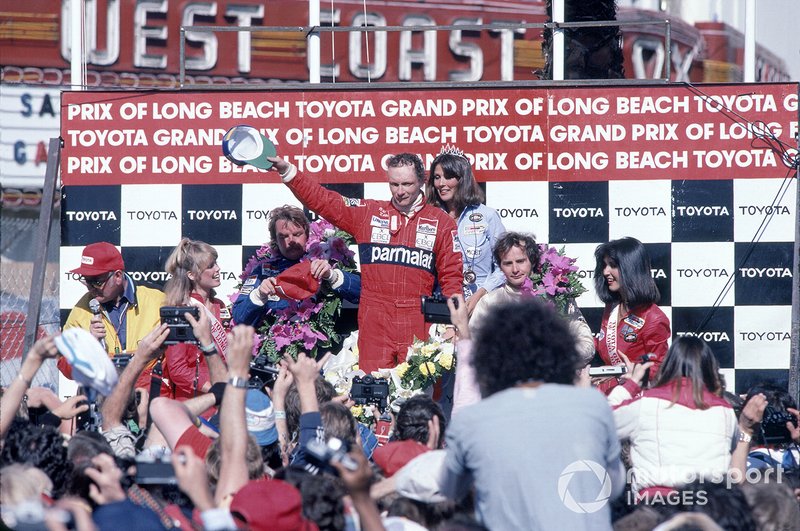 Just a few weeks later in Monaco de Cesaris had a chance of redemption. He drove a controlled race, surviving a late shower. As car after car hit trouble in the closing minutes victory nearly came his way, only for a lack of fuel to leave his Alfa parked on the last lap, as eventual winner Riccardo Patrese passed by. He was classified third.

There would be some other good days. Indeed the following year he would lead the opening stages at Spa, and earn second places in Germany and South Africa.

Late in his career he would earn a place in the history books as Michael Schumacher’s first F1 teammate at Jordan at Spa in 1991 – and had his engine not failed that day, he would have been on the podium again. However, that first win never came. 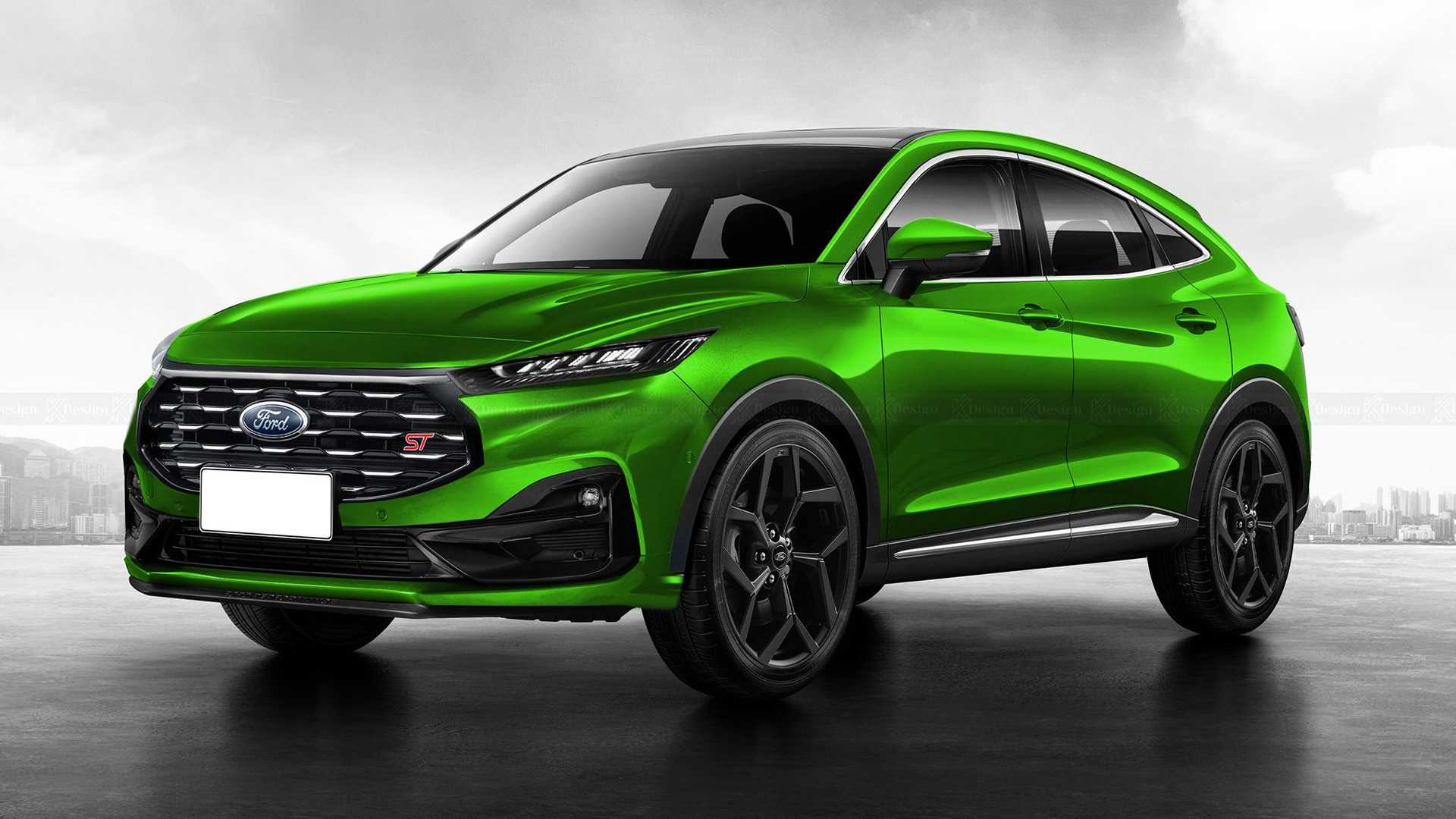 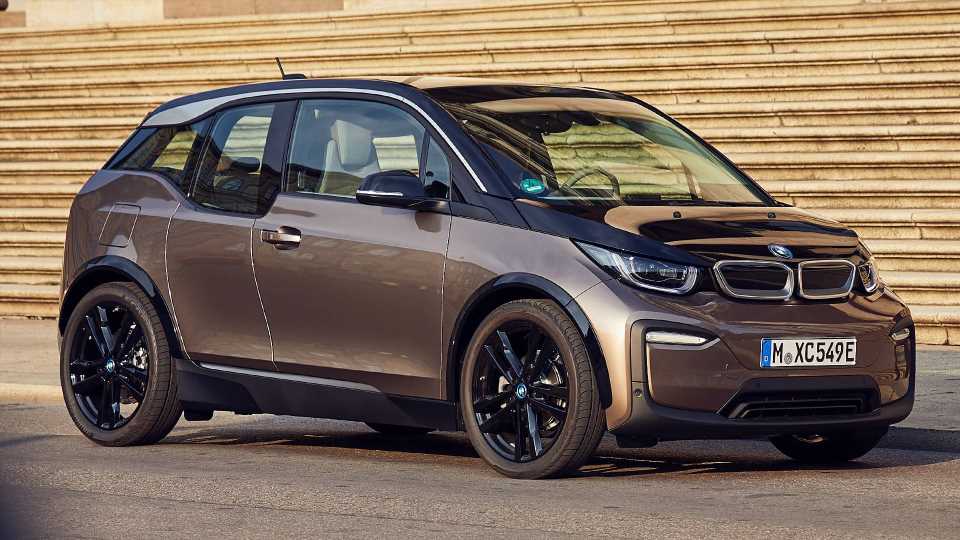