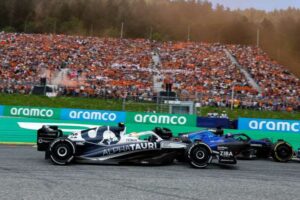 AlphaTauri have hit a dreadful run of form over the last three races – and Yuki Tsunoda described the Austrian Grand Prix as their most difficult weekend this year.

From the high point of Pierre Gasly’s fifth-place finish in Azerbaijan, it has been downhill all the way through the trips to Canada, Britain and now Austria with 14th the highest placing either AlphaTauri driver has achieved.

At the Red Bull Ring, they were 15th and 16th with Gasly incurring two separate five-second penalties and Tsunoda simply unable to get competitive with the AT03 he was in.

Tsunoda was actually last across the line of those to complete the race, but was promoted one place due to a penalty incurred by Sebastian Vettel.

“It was really tough, a really long race,” said the Japanese driver. “I didn’t have pace at all, there was probably just something wrong in the car.

“We couldn’t find from FP2 what was the issue, so we have to find out for the future. I gave it everything but the situation didn’t improve – just have to move forward.

“It was the most difficult race week so far, probably. Qualifying went okay but other than that, the race was horrible.

“Hopefully, this is the last time we end up like this. From now on, hopefully we can fight in the higher positions.”

During their poor spell, AlphaTauri have lost out in the Constructors’ World Championship standings to Haas and now sit eighth, seven points behind the American team.

In the team’s press release, technical director Jody Egginton was unable to shed too much light on what the problems were that had caused the disappointing performance.

“A very difficult race for us as we weren’t able to make any progress,” said Egginton. “Additionally, on Pierre’s side we had a couple of penalties that set us back further.

“It was clear early on it would be a two-stop race, so we brought Pierre in to try and move forward with that, however he hit a bit of traffic, holding him up, and from then on it was tough.

“Likewise with Yuki, we tried to get him in a stronger position through the stops, but he didn’t have the pace. We were on the back foot all day unfortunately came away with nothing.

“We’ve a lot to review back at base. Now our focus is to get our updates to the car ready for the French Grand Prix and get ourselves back into the midfield fight.”