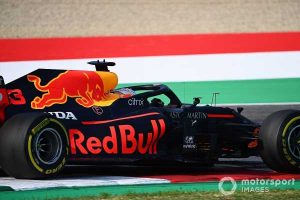 Honda has made changes to the electrics and software of its Formula 1 engines in a bid to avoid a repeat of the problems that hit Max Verstappen at the Tuscan Grand Prix.

Verstappen’s hopes of challenging the Mercedes at Mugello were over within seconds of the start when his power unit suddenly lost energy, and he tumbled down the order prior to getting caught up in a first-lap accident.

Honda spent the time after the race getting to the bottom of went wrong, and concluded the problem was not related to the main components of the engine, including the MGU-K nor MGU-H.

Instead, it suspected that a combination of factors relating to both the engine’s electrics and software came together to trigger the issue.

In response, the Japanese car manufacturer has done work to try to avoid a repeat of the issues.

Speaking ahead of the Russian Grand Prix, Toyoharu Tanabe, Honda’s F1 technical director, said: “Using the time since Mugello, our priority has been to carefully analyse the reason for Max’s retirement in that race.

“Our investigation revealed that several factors caused the problem and we have been able to apply countermeasures to deal with each of these, with the aim of ensuring the fault does not happen again.”

Verstappen was extremely frustrated by the retirement in Mugello, and Red Bull vowed to fully update him on the situation, and what Honda had done, before he travelled to Russia.

Reflecting on the situation after those talks, Verstappen said he had faith everyone was doing all they could to improve things for the future.

“It is of course not nice leaving a race weekend in that way, especially when I think we had a good chance of more than just a podium but we have to put that behind us,” he said about Mugello.

“We have of course discussed the issues as a team and everybody is working in the same direction and trying to fight for every possibility in every single race that we can.”

As part of its original plan, Honda will introduce some final new power unit elements for drivers this weekend, with this being the final change before the end of the season.

The move to the third power units is not related to any of the problems that emerged at Mugello.