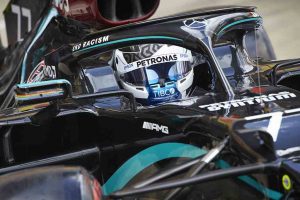 Valtteri Bottas is gearing up for Formula 1’s first visit to the Algarve International Circuit by familiarising himself with the track on a simulator at home.

The Portuguese Grand Prix returns to the F1 calendar for the first time since 1996 on October 25, not at the previous venue of Estoril but much further south near Portimao on the Algarve.

It will be a new track for many drivers but not Bottas, who has some experience of competing at it around a decade ago not long after the facility first opened.

The Finn competed there as part of the British Formula 3 series in 2009 when among his rivals was the winner of that year’s championship – none other than Daniel Ricciardo.

Now Bottas is making sure he is as prepared as he can possibly be in the bid to rise again from a hugely disappointing end to the Eifel Grand Prix weekend – he put his Mercedes on pole position but had to retire from the race with a power-unit problem.

“It’s always nice to have a new circuit for Formula 1. Like we saw at Mugello, it’s really nice to have something new, something different,” said Bottas, quoted by RaceFans.

“I’ve been there, I’ve had one or two races there with F3 but that’s about 10 years ago.

“But I know the track a bit and we did already some prep with the team when I was able to go to the UK, some simulator prep, and I have a home simulator as well, so for sure I can do a bit of work there.”

The retirement at the Nurburgring, coupled with his team-mate Lewis Hamilton’s victory, almost certainly cost Bottas his last chance of wresting the World Championship title from his colleague, whom he now trails by 69 points in the standings.

“I think I still had a chance to win the race because I had committed to a two-stop quite early, and I think a two-stop in the end was the best strategy. The engine thing, I couldn’t believe it.

“Now I understand the gap to Lewis is pretty big in terms of points. Definitely would need a miracle.

“But as always, [there is] no point to give up. You need to keep the bar high and keep trying. We’ll see.

“Disappointed is the best word.”