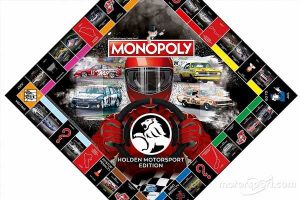 Holden’s most iconic racing cars feature in a new Holden Motorsport edition of the famous monopoly board game.

The game covers a wide spectrum of Holden touring cars, starting with the 1968 HK Monaro and including Toranas from the 1970s and Commodores from the 1980s right up to the current ZB – which will be the last to carry the famous nameplate.

The board pieces are a HT Monaro, an A9X Torana, a VP Commodore, a Holden logo, a pair of chequered flags and a wheel.

“We are thrilled to celebrate Holden’s racing legacy with this exciting edition of Monopoly and a new puzzle to match,” said Holden Aftersales marketing manager Chris Payne.

“It’s a fitting way to celebrate Holden’s involvement with the sport over the past 50 years.