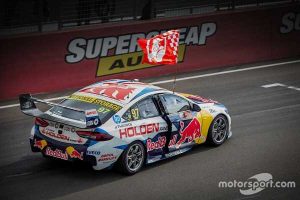 A lifelong Holden fan has earned his place in Bathurst folklore after jumping a fence to hand Shane van Gisbergen a flag on Conrod Straight.

Van Gisbergen marked the occasion with an impromptu post-race tribute when he stopped on Conrod Straight and waved a fan holding a Holden flag out onto the track.

The Kiwi then continued the slow trek back to parc ferme with the flag proudly flying out the window of his ZB Commodore.

The ‘flag man’ has now been revealed as lifelong Holden fan Dennis King, who was one of the few spectators allowed at the event thanks to a friend owning part of the trackside property.

King’s been attending the Great Race since 1974, and told the V8 Sleuth website that he relished the opportunity to play a key role in Holden’s Bathurst send-off.

“The flag was my wife’s,” King explained. “We watched the finish on TV inside and it occurred to me they were doing another [slow down] lap, so I raced down the front fence waiting for Shane to come around, stepped out behind the barriers and started madly waving the flag – an the next thing he steers the car at me.

“It was right opposite a flag marshal post so I thought I was in trouble. But the next minute had had the door open and his hand out and he’s waving at me to come towards him.

“He said ‘can I have your flag?’ and I congratulated him and off he went. Being a Holden fan all my life, it was a fantastic finish to the whole weekend.”