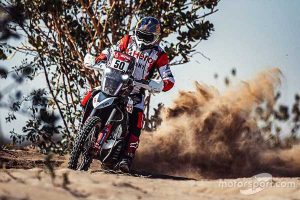 Husqvarna’s Paul Spierings has revealed that he had to ‘resuscitate’ Hero’s CS Santosh after the Indian rider suffered a huge crash on Wednesday’s fourth stage of Dakar 2021.

Competing in his seventh Dakar Raly for Indian manufacturer Hero, Santosh fell off his bike 135km into the stage at 11:45am local time – in an area that features gravel tracks between mountains.

Spierings was the first to arrive at the crash scene where he found an unconscious Santosh as well as fellow Husqvarna rider Maurizio Gerini.

“I saw two bikes that were down and both riders were on the ground, one left and one right,” told RallyManiacs.com. “Gerini was okay, he immediately stood up and went over to Santosh.

“When I stopped my bike, just before the rock they hit, so that no one else could crash over it, I pushed the emergency button. After I got at him we did resuscitation and after fifteen minutes three helicopters from the organisation arrived.

“They took over from me, but at that stage I felt his heart was beating again. I was very relieved by that.”

Following the arrival of the medical team, Santosh was transported by helicopter to Al Duwadimi’s Advanced Medical Post with a suspected head injury, before being flown to Saudi German Hospital in Riyadh for further medical evaluation.

At 6:50pm local time, ASO issued an update to say the 37-year-old is in induced coma to “avoid being shaken” and will undergo further scans on Thursday to determine the seriousness of his injuries.

In a separate statement, Hero said “he has suffered a trauma in head. He has been sedated and will be under observation for overnight. He will undergo a scan tomorrow.”

Hero lost its star rider Paulo Goncalves during the 2020 Dakar rally, the first to be held in Saudi Arabia, after the Portuguese veteran was killed in a major crash on the seventh stage.

Hero team principal Wolfgang Fischer said: “It was quite an emotional difficult day for us as it was the same stage we lost Paulo last year in reverse order, so a lot of emotions.

“Santosh had a bad crash today. He’s out of the Dakar, now in medical treatment in the hospital. We wish him all the best for a speedy recovery.

“On the sporting side, on the other hand we had the best result so far with a superb sixth place for J-Rod (Joaquim Rodrigues), really coming back to his rhythm. And also for Sebastian [Buhler] it was a good stage until a little mistake at the end, losing sometime.

“So we all cross fingers for Santosh to come back soon and for the team to continue without further crashes.”