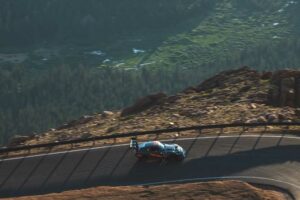 The 99th running of the Pikes Peak International Hill Climb (PPIHC) was crazy, exhausting, dangerous, and one of the greatest motorsports event you can see.

Fifty-two drivers and their crew had spent close to a month preparing for the annual time-attack hill climb near Colorado Springs. We arrived for the fun part: the last four days of practice and qualifying, leading into teams’ final attempts on race day on Sunday, June 27. Snow and ice at the top of the mountain cut three miles from this year’s climb, putting even more pressure on drivers to do more with less. The runoff area along this private road’s most dangerous sections is measured vertically. And so are the mist.

PPIHC is best described as an event as dangerous as any World Rally Championship stage, but stitched together with the spirit of a 24-hour endurance race. No part of Pikes Peak mountain harbors fools or pretenders. The only people on the mountain on race day were race drivers, race cars, race teams, race fans, and three bears who would have identified as at least one of those. Everyone here is only here because they want to be—especially the bears.

This place is wild, giving just a glimpse of what motorsports used to be: feral and exciting. There’s no mandatory anything here. The only stoppage in play is to tow mangled pieces of bodywork and tire off the asphalt so the remaining drivers can climb beyond the failures of others and into the clouds. Spectators roam past fences for a better view, and even the blades of the low-flying camera helicopter mostly drowned out the siren required for electric vehicles competing here. Most people woke up yesterday to watch today’s race, except for the people camped along the 12.3-mile race course, who are legendary in their own right.

Practice days are arguably better for spectators than race day. Drivers do several passes on one of three sections of the mountain. From the cliffs, we’d watch cars come up one at a time. As quickly as the thunder from local pastor Layne Schranz’s Chevrolet SS stock car passed, a tornado of rpm would scream from the bottom of the mountain from the next car. Point is, on race day you get to see each car once. During practice you can watch a few cars all morning. 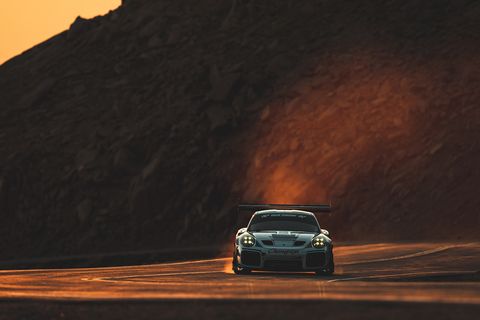 The true king of Pikes Peak Mountain was back this year: Romain Dumas, the crazy Frenchman who set an unbeaten record of seven minutes, 57 seconds in Volkswagen’s all-electric ID. R Pikes Peak racer in 2018. For 2021, Dumas had the second-fastest lap in his Porsche 911 GT2 RS Clubsport. His closest competitor, Rhys Millen driving a Bentley Continental GT3, was more than 12 seconds ahead of Dumas after the second sector, but his Bentley developed a boost leak later in the run. The power loss dropped the New Zealander nearly five seconds behind Dumas by the end of the event, but he still managed to finish fourth overall.

The overall winner was Robin Shute. This was his second win at Pikes Peak, and a big one at 36 seconds ahead of second place. His car is a turbocharged Honda-powered homemade Unlimited category car. The Unlimited division is a longtime favorite of this event. Its requirements in the PPIHC rulebook have fewer words than the first paragraph of this story. If you can afford to build it crazy enough, and can procure someone just slightly crazier and brave enough to test it along a cliff, it’s allowed. Which sounds simple but is also just such an insane concept in 2021. Apply this open-ended guide to any other sport, and maybe we’d see cybernetic LeBron James shooting threes from the parking lot with a basketball rocket launcher.

Randy Pobst was back too. After sending a Tesla Model 3 flying into a wall at Bottomless Pit, he came back for more. This time winning the Exhibition division with his new Model S Plaid from Unplugged Performance, but still finishing 10 seconds behind a 1996 BMW M3 from the Pikes Peak Open division.

Isn’t that the point of motorsports? To experience something greater than just people driving. To see groups of humans push the boundaries of both physical possibility and moral responsibility. Sorry, maybe that’s the altitude talking. Like a father we overheard at 14,115 feet at the summit explaining to his son what Pikes Peak was: “It’s like walking through smoke, but instead it’s clouds.” Whoa, man. Are you like, one of those professional thinkers?

Next year is shaping up to be even crazier for the 100th anniversary of PPHIC. There’s a rumor of legendary cars from Pikes Peak’s past making a return to the mountain. We’re totally going, but until then, we’ve got a lot of sleep to catch up on.