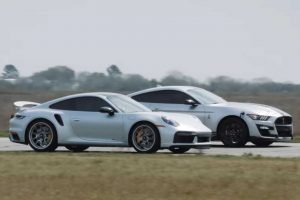 Few things are more enjoyable than a heads-up drag race between two incredibly powerful vehicles. Aside from the obvious instant gratification of the sport, it’s also a great way to measure performance. That’s why Hennessey recently staged a race between the latest Porsche 911 Turbo S and the shop’s own 1,000 horsepower (746 kilowatt) Ford Mustang GT500.

In replicating a realistic scenario – and eliminating the traction variable from the equation – both vehicles start from a 50 miles per hour (80 kilometers per hour) roll. Rather unsurprisingly, the pony car sprints to an easy victory over the quarter-mile competition. As a small consolation to Porsche fans, we’d be remiss not to mention that both presenters are aware that this isn’t necessarily a fair fight between the two.

The American tuning company was quick to mention that a standard GT500 would likely lose to the Porsche. If you didn’t think John Hennessey already had tremendous confidence in his work, the 911 Turbo S in this video is his personal runabout.

Regardless, we’re still bummed that we didn’t see a standard run-of-the-mill drag race between these two. We’d wager that the savage traction of the Porsche could fire it into an easy victory in the quarter-mile – a half-mile race would be very interesting, but the drag strip at the Penzoil Proving Ground unfortunately doesn’t go that far.

While the title of the video includes the phrase street race, both Hennessey Performance and Motor1 are strongly against this practice; the demonstration in this instance is for test purposes only. If you want to race your friends, do it properly and safely at your local race track.