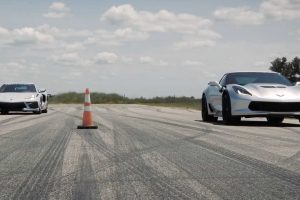 Proof that extra horsepower fixes everything.

The Chevy Corvette is a tuner’s dream offering customers a competent chassis, robust V8, and affordable stock of possible mods. Texas-based tuner, Hennessey Performance, has taken the art of tuning up another level and offers customers specific tuning packages for their Corvettes with a Hennessey backed warranty. Hennessey is currently working on tuning the new C8 Corvette and wanted to see how their HPE850 C7 Corvette Z06 stacks up against a stock C8 Corvette.

First up we have the now-familiar C8 Corvette ready to take of its predecessor and show what a mid-engine layout is capable of. The C8 Corvette is powered by the 6.2-liter LT2 V8 which produces 490 hp (365 kW) and 465 lb-ft (630 Nm) of torque. This stout engine is an evolution of the LT1 found in the previous generation C7 Corvette Stingray. The only transmission available is the 8-speed dual-clutch built by Tremec which gives the C8 a massive performance advantage over the previous C7 Corvette’s auto. Hennessey has been working on building tuning packages for the C8 Corvettes and we expect big power numbers for the new bargain supercar from Detroit.

The C7 Corvette Z06 featured in today’s video is no ordinary Corvette, and benefits from Hennessey’s HPE850 package. As the name suggests, this package pumps up the Z06’s horsepower from 650 horsepower all the way up to 850 horsepower. This increase in power is achieved thanks to a completely rebuilt cylinder head the increases airflow and replaces things like valve springs, valves, and lifts. There’s also a smaller pulley to increase boost and long tube headers with high flow catalytic converters to allow the engine to breathe more deeply.

When it comes to the final race, it’s clear that an additional 350 horsepower can overcome the superior engineering and drivetrain of the new C8 Corvette. We expect the C8 to have its revenge however, once Hennessey throws an extra couple hundred horses in the C8.