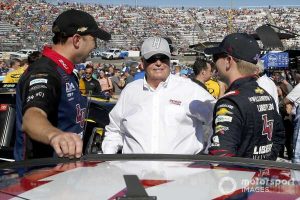 Hendrick Motorsports has been penalized for exceeding 70 hours of Wind Tunnel testing allotted this year.

The team reported the issue to the sanctioning body themselves, which is an L2 penalty as it violates Section 5.3.3 in the NASCAR Rule book.

The result is a $100,000 fine and the loss of ten hours of 2021 Wind Tunnel testing time. NASCAR reports that HMS went over the allotted time by less than an hour.

Hendrick Motorsports had three of their four drivers make the 2020 playoffs with Jimmie Johnson being the lone driver to miss out. William Byron was eliminated in the first round with both Chase Elliott and Alex Bowman advancing into the Round of 12.

HMS will not appeal the penalty.

NASCAR also announced two $10,000 fines for lug nut violations in the Cup Series involving the No. 11 Joe Gibbs Racing Toyota of Denny Hamlin and the No. 12 Team Penske Ford of Ryan Blaney.