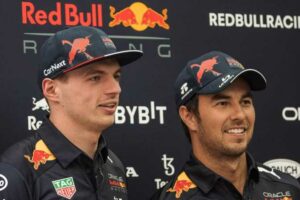 Red Bull’s Helmut Marko felt that both drivers, Sergio Perez and Max Verstappen, were equals at the Australian Grand Prix.

Over the previous three seasons, Verstappen has been able to firmly establish himself as the lead driver at Red Bull, with the problem for the team being finding a driver who could come close to the level which the Dutchman was performing at.

In 2021, Perez’s first season with the team, that trend showed little sign of changing, but following the major regulatory shift in Formula 1 for 2022, Perez has without doubt upped his game.

The Mexican racer claimed pole for the first time in his career at the second round of the season in Saudi Arabia, controlling that race in the early stages before losing out terribly when the Safety Car was deployed, while the Australian GP was then another solid showing.

He would qualify P3, one place behind and within a tenth of Verstappen, before picking up 18 points for a P2 finish in the race following Verstappen’s retirement while running in that position.

Marko was happy with how Perez performed, saying he delivered the kind of race expected of him moving forward.

But the greatest compliment came when Marko described Perez as Verstappen’s equal at Albert Park.

“Checo drove a great race, he was on par with Max,” Marko told ORF, as quoted by Speedweek.com.

“He lost a position at the start because [Lewis] Hamilton made a sensational start, he had a little slip there, but he showed a good race and we expect the same from him.”

Marko acknowledged that Perez has shown an improvement in qualifying as well as now being in the mix come race day, which traditionally has been more Perez’s strong suit.

So, while Marko would have loved to secure that P2 and P3 finish in Melbourne, he was happy to see Perez claim P2 to limit the damage as best he could.

“He has improved a lot this year in qualifying and in the race he is also there,” Marko explained.

“Actually, we should have got at least second and third places. But we are happy that Checo finished second.”

Red Bull principal Christian Horner said that Perez deserved “a lot of credit” for his performance, especially since the Safety Car had not been kind to him again in Australia, allowing Mercedes’ George Russell to jump him with a ‘free stop’.

But like he did with Hamilton earlier in the race, Perez was able to pass the other Mercedes of Russell for what turned into a P2 finish.

“Checo deserves a lot of credit because he was unlucky again with the Safety Car timing,” said Horner.

“But he made the necessary progress and finished second. He passed Lewis Hamilton with a strong manoeuvre and then had to overtake George as well.”