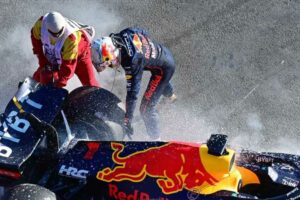 Helmut Marko has said Red Bull can assume their engine problems will have been fixed by the time they head to Imola, if Honda are to be believed.

Red Bull now race under the Red Bull Powertrains moniker, but previous engine supplier Honda are still involved in the assembly and maintenance of their power units as the team transition to becoming a manufacturer in their own right.

But the team have suffered three retirements in the first three races with reliability issues, with Max Verstappen having dropped out from second place on two occasions, while Sergio Perez made it a double DNF for the team at the season opener in Bahrain.

As a result, Ferrari and Charles Leclerc have opened up a significant gap on both Red Bull drivers at an early stage of the season, but the team’s motorsport advisor believes they are now in a better position in terms of having their power unit issues solved.

“Reliability. We had to take a lot of punishment and we are now well behind Charles Leclerc. However, we have dealt with things quickly,” Marko told Austrian broadcaster ORF, when asked which out of Ferrari’s pace or Red Bull’s reliability had concerned him most.

Marko added that Verstappen’s failed power unit from Melbourne will be available for him to use again as part of their pool for the season ahead, lessening the likelihood of him having to take a grid penalty further down the line.

But he also said that porpoising, the bouncing on the cars caused by the ground effect aerodynamics ‘pulling’ the floor towards the track surface, was a factor in Verstappen’s retirement last time out, but believes the team have now eliminated the worst effects of it.

“Everything is fine with that,” Marko confirmed. “The problem was not in the engine itself, but in the fuel line. That cracked under high pressure. And we think that had something to do with the problem of porpoising.

“We do indeed have porpoising well under control, but nevertheless there are small movements and that is mainly to do with the way the car ‘lands’ again. We assume that this was the main cause of the damage to the fuel line.”