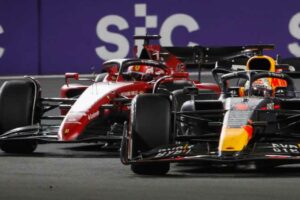 With Charles Leclerc taking on Max Verstappen in the opening two race weekends, Helmut Marko believes Ferrari have a “clear number one”, the same as Red Bull.

Two races into the 2022 championship and Leclerc is leading the Drivers’ standings with 45 points, 12 ahead of his team-mate Carlos Sainz, and 20 up on Red Bull driver and reigning World Champion Max Verstappen.

After two winless seasons with Ferrari, it has been an incredible start to the campaign for Leclerc, the Monégasque driver P1 in Bahrain, P2 in Saudi Arabia and scoring the fastest-lap point in both races.

And although his team-mate Sainz has also been on the podium twice, Marko reckons the battle to be Ferrari’s No 1 driver for the 2022 championship has already been decided.

“That means we can’t expect any support from Sainz.

“So it will be a situation like ours, where there is a very clear number one driver.”

Is it okay to be in love with a camera angle? Asking for a friend… 😳#SaudiArabianGP #F1 pic.twitter.com/4DZCf1GLOA

The Austrian is looking forward to watching the fight between Leclerc and Verstappen play out, the two having raced wheel-to-wheel at the Sakhir circuit and again in Jeddah.

Verstappen was on the back foot after retiring from the Bahrain Grand Prix with a fuel pressure problem but hit back at the second race, the Saudi Arabian Grand Prix.

He took victory ahead of Leclerc to get his title defence up and running with a 25-point haul.

“That hit us hard,” Marko told F1-Insider.com of Bahrain. “But there is still enough time to regain the lead. Saudi Arabia was just the beginning.”

“It’s been a long time since two teams fought as equals,” he said. “The last time was in 2010. Back then it was between Red Bull and Ferrari.”

He reckons this season’s championship fight will come down to who can develop their all-new car the fastest.

“The cars that were built according to completely new regulations are still relatively early in their development,” said the German.

“I think Ferrari are furthest along at the moment.

“But Red Bull are masters at making a car faster over the course of a season. Ferrari have to counter that, otherwise it will be difficult for the title. But I think they know that.”