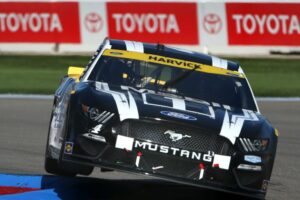 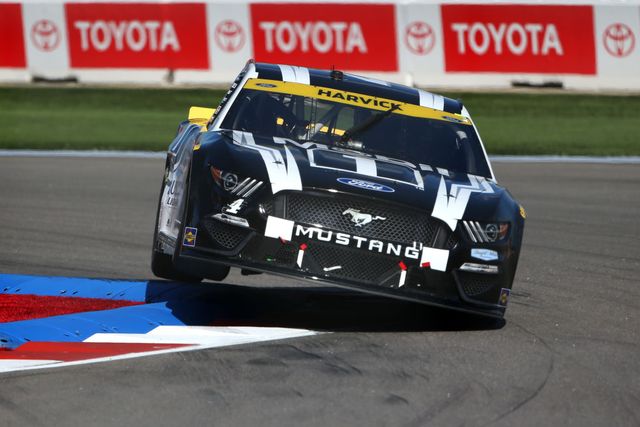 It seems altogether appropriate that one of the worst seasons of Kevin Harvick’s NASCAR Cup career ended – for all intents and purposes, anyway – with a head-on crash into the wall late in Sunday afternoon’s Bank of America Royal 400 at Charlotte Motor Speedway.

The 33rd-place DNF after 98 of 109 laps eliminated the 2014 Cup Series champion from the eight-driver field still eligible for this year’s title. He was among the four drivers who finished below the elimination cut line and will not advance to the upcoming Round 3 of the four-round Playoff Series.

That three-race set opens next weekend at Texas Motor Speedway, continues on October 24 at Kansas Speedway, then ends on October 31 at Martinsville Speedway. The eight advancing from the original field of 16 are Denny Hamlin and former champions Kyle Busch and Martin Truex Jr. from Joe Gibbs Racing; race winner Kyle Larson and reigning champion Chase Elliott from Hendrick Motorsports; and Ryan Blaney and former champions Joey Logano and Brad Keselowski from Team Penske.

Harvick began the 252-mile race fairly safe within the 12-driver field. He was ninth-ranked, 41 points ahead of the cut line, and had been ninth, third, and 11th in the three previous Roval races. He ran well enough during most of the day to stay safely within the group of drivers expecting to advance.

But he may have let his emotions get the better off him after he spun Chase Elliott into the wall at Turn 8 early on. The contact was a carryover of a grudge from the race at Bristol where Elliott slowed Harvick who was leading at the time and allowed Kyle Larson to take the win.

Elliott would have heavy damage but recovered and was nearing Harvick at lap 100 when Harvick inexplicably slammed into the Turn 1 wall. His No. 4 Stewart-Haas Ford briefly caught fire as rescue workers tended to him. He was uninjured, but his car was destroyed. It was only his third DNF this year, but he’s winless for the first time since 2009 after winning nine times last year.

“I just pushed it in there too hard, got the tire locked up,” Harvick said of the solo accident. “I felt like I needed to go to get a couple spots back I lost. I got the left front locked up and couldn’t turn.”

Elliott meanwhile finished 12th and will advance to the Round of 8.

“As far as Kevin goes, just want to wish them a merry off-season and a happy Christmas,” Elliott said post-race.