Home » Racing » Hamilton Plans to Add to F1 Legacy, But Will it Be With Mercedes? 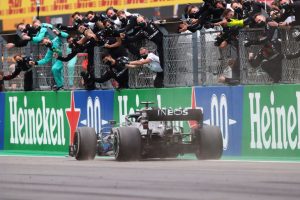 People can argue endlessly about who is the greatest Formula 1 driver of all time—and they have been—but one cannot argue with numbers.

By notching his 92nd F1 race win with a dominant display of ability at the F1 Portuguese GRand Prix at Portimao, Lewis Hamilton became the winningest driver in F1 history, passing the mark set by Michael Schumacher back in 2006.

There’s no reason to believe that Hamilton won’t take that record over the 100-win mark in the course of 2021, and he may end next year with an eighth World Championship, which would eclipse Schumacher’s astonishing seven titles.

But how much longer will Hamilton go on racing?

If you believe Hamilton, even he does not know the answer to that question. He’s 35 and will celebrate his 36th birthday in January—three and a half weeks after this F1 season ends in Abu Dhabi on December 13. No one doubts that he will sign a new deal with Mercedes for 2021, but the big question is how long that new deal will be.

“I haven’t made any decisions, but I do want to stay,” Hamilton said in Portugal. “When we do sit down, normally we plan in three-year periods, but of course, we’re in a different time. Do I want to continue for three years? That’s also a question; there are many, many questions still to be answered.

To the legends before me, thank you for paving the way 🙏🏾 https://t.co/u9hIcdKz2j

Mercedes has committed to F1 for the immediate future but the world is still facing a financial crisis and no real clarity about when, or even if, things will return to normal.

“Everyone’s had a big hit this year, but if you look at the future I think the future’s bright,” he said. “I think there’s going to be some changes. Ola (Källenius, Daimler’s CEO) came out with a new plan that Mercedes has to move forwards in terms of sustainability, in terms of pushing their cars more towards electric, and the same with AMG, so I think the future’s bright. These are all things that we will naturally think about, but I think I’ve earned the right or the position so far to be able to stay for a decent amount of time, so time will tell. I can’t really say too much more, hopefully you’ll hear something in the next couple of months.”

Anyone who thinks that Hamilton is on the move should think again.

“I guess at some stage we have to sit down and have the conversation, but it’s not a priority right now,” Hamilton said at the recent Eifel Grand Prix. “Getting the job done—winning a seventh title—is for me personally this year the priority. That’s what I’m solely focused on right now.”

Hamilton’s deal with Mercedes started with a three-year deal for 2013-2014-2015, the second covered 2016-2017-2018, but he then decided on a two-year extension for 2019 and 2020. Another two-year deal could allow him to pass Schumacher’s record of World Championships if he wins in 2021 and would then give him a year to see how he likes the new formula—and how Mercedes does.

“At the end of the day, I’ve always been committed to this team, and completely transparent,” Hamilton said. “I know if you don’t have communication for a while, people can start to hear whispers or have a fear. I could, for example, worry that Toto (team principal Wolff) is speaking to somebody else. Which is silly, because I don’t think that.

“I’m just saying that’s what humans can do. So, it’s always been important just to be really clear with each other about our intentions. I haven’t spoken to anybody else, and I don’t plan to. At some stage, Toto and I will sit down and work out our path, moving forwards. We have achieved quite a lot together and it’s quite remarkable what we’ve done together over these years. And we are still not done.”

Hamilton says that part of his motivation is working with such a great team of people.

“I’ve got the best team behind me,” Hamilton says. “They continuously inspire me. Each year I come back to the factory and see these guys pumped up and focused and being incredibly smart and innovative. And also just so welcoming to me. You would have thought that after all this time we’d get fed up with each other but we don’t, there’s a real love within this team and I’m grateful for that. I love doing what I do. I love the challenge.”

“The sport, the smell of it, the whole aura and atmosphere it creates, is going to be difficult to let go,” he added. “But whilst I’m older, I feel as young as them, at least in spirit. I’m still very much a kid when I’m off the camera.

“That will probably change when I start seeing gray hairs and stuff, but I’m good for now.”

Who is Lewis Hamilton fooling? He’s not going anywhere in 2021. Or is he? Start the discussion in the comments section below.