Hakkinen on one key attribute that led to Lewis Hamilton win 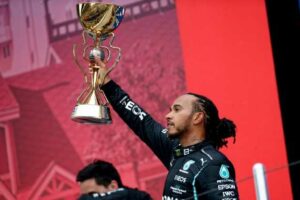 Mika Hakkinen says that patience was the key quality in Lewis Hamilton’s victory at the Russian Grand Prix.

The Mercedes driver claimed the 100th victory of his Formula 1 career in Sochi after taking the lead from Lando Norris in the closing stages of the race.

He spent the vast majority of it chasing the McLaren man down and wasn’t able to get ahead until rain started to fall and cause chaos, with him pitting at a better time and securing the win.

Hakkinen says it was an excellent drive from the seven-time World Champion in various ways, with his patience, in particular, being key.

“Lewis Hamilton used all his natural speed and experience to take an amazing 100th Grand Prix victory. It is a huge achievement for the seven times World Champion,” said the Finn in his Unibet column.

“He showed another important quality in the race – patience. It’s a quality you learn over time, particularly when you have confidence in yourself, your car and the team. You learn to focus on simply driving your best strategy, allowing the race to come to you.

“You could see that in Sochi. Despite a difficult qualifying and dropping three places at the start, Lewis’s recovery was steady. He picked off each target and calmly worked his way into the fight with Lando.

“In the dry conditions he found it more difficult to get past Lando’s McLaren, so when the rain arrived it became a clear opportunity for Lewis to take.”

Today we won our 100th race! Words can’t describe how it feels to make history with this team of hardworking, driven and passionate human beings. We must keep fighting, keep rising. We’ve got a championship to win #LH100 pic.twitter.com/e2oQHVAVDi

The win gave Hamilton back the lead of the championship, although it wasn’t by as big a margin as he would have hoped, with Max Verstappen ultimately finding in P2 after starting from the back of the grid.

Nevertheless, Hakkinen still feels it’s a crucial result for the Brit in his quest to claim an eighth World Championship.

“It is a very important win in relation to the World Championship,” he added.

“It is Lewis’s first victory since his home win at Silverstone in July, and one he needed to score since championship rival Max Verstappen started from the back of the grid.”

Hamilton may well be the one starting from the back soon, with Red Bull principal Christian Horner and driver programme chief Helmut Marko both expecting him to take a new power unit this season.