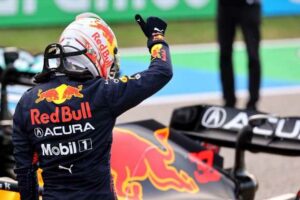 Red Bull principal Christian Horner explained that it was a stressful lead-up to qualifying after a crack was found in Max Verstappen’s wing.

Not long before Q1 got underway at the United States Grand Prix, Red Bull mechanics were seen working on the rear wing of the RB16B, though thankfully were able to complete the repairs in time for the session start.

It turned out that Verstappen’s rear wing had picked up a crack, something not present on Sergio Perez’s car or any of the other wings.

But with FIA permission they got the fix done, although it did make for more stress than hoped for prior to the session.

“There is always something going on, there is never a stress-free session,” Horner told Sky F1.

“But I don’t know whether Max hit something because there was quite a crack and nothing on the other car or on any of the other wings, so we got permission just to beef it up a bit on both cars, so we’ll have a close look at it tonight.”

And it was a good job that Red Bull got that rear wing back in working order as Verstappen went on to claim pole, though after the first Q3 runs it was Sergio Perez in the other Red Bull on for that P1 spot.

Perez will though line up P3, and Horner hailed a rare strong qualifying for the Mexican, who he felt was going to get pole before light rain at the end of Q3.

“Checo is on fire this weekend,” Horner stated.

“From pretty much the first session he has been pretty happy with the car. I thought he was going to get his first pole position.

“A little bit of rain at the end there, so being last on track maybe it cost him a little bit in the last sector.

“But again another massive performance by Max, keeping his head and delivering that lap time, so phenomenal.”

Garage 🤜🤛 All of us 🙌 #USGP 🇺🇸 pic.twitter.com/LAds7DdJyU

With Mercedes’ Valtteri Bottas dropping to P9 on the grid thanks to an engine penalty, Red Bull are now in the unfamiliar situation of having a two-car attack against Hamilton.

“We know Checo races so well, so qualifying has been his struggle this year,” said Horner.

“It’s tough to follow here so you definitely want to lead into Turn 1, I think it’s going to be a grandstand start at Turn 1.

“But at least we’ve got two guys starting at the front of the field.

“If we can get a clean Sector 1, you hope by the time you get to Turn 11 you’ve got that little bit of a gap, so that is going to be crucial.

“And if Max can see the yellow helmet of Sergio in his mirrors I think he would be a lot happier with that.”

To that point, Horner stressed that his team must take full advantage of Bottas’ engine penalty, and so Perez will be expected to play the team game.

“To help your team-mate,” Horner replied when asked what the message is to Perez.

“With Valtteri taking the penalty we’ve got to try and capitalise on that.”