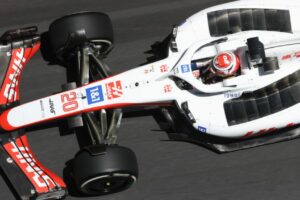 Guenther Steiner says “if goes well” Haas will upgrade their car at the Hungarian GP, but he sees no reason to “indiscriminately” throw updates at the car.

Haas brought in their first double points-haul of this championship at the British Grand Prix where Mick Schumacher was P8 with Kevin Magnussen taking the chequered flag in tenth place.

While the result was much-celebrated as it was Schumacher’s first-ever Formula 1 World Championship points, it was even more impressive as Haas are the only ones on the grid yet to update their car.

The VF-22 that scored five points at Silverstone is the exact same car that Haas ran on the final day of pre-season testing back in March.

Team boss Steiner stands by the decision not to trial new parts just because everyone else is.

“I’ve always said that we don’t just introduce updates indiscriminately because everyone else does too,” he said as per Motorsport.com. “We walk our own path.

“We only come up with it when we think we’re making a step with it. It’s not for the stage.”

But, he added, “if all goes well, for Hungary that is just before the summer break.

“Hopefully we will get more performance out of the car that way.”

Haas have two grands prix before Hungary, Austria and France, with the Italian believing Silverstone is not the end of Haas’ points with the current spec of the VF-22.

“The VF-22 is also still strong with the package that we have been using since the beginning of this year,” he continued.

“We need a smooth weekend to get into the points. The competition is strong. If it doesn’t work out, we’ll have another chance 14 days later in France.

“I think we can potentially go for points in all races.”

As for Schumacher, he wants to add to his four points in Austria and reckons a wet weekend would do him just fine.

“Yes, I want wetness … I want rain,” he said. “The car handles well in the rain. That’s motivating.

“If you’re looking forward to rain, it can do a lot with how you approach something like that than someone hoping it stays dry. It’s all about the mindset.”

He qualified P6 in the rain in Canada and P19 at Silverstone, although that turned out to be a steering wheel issue, not the car’s pace.

He raced his way from 19th to ninth on the Sunday, and in the dry.

Haas are P8 in the Constructors’ Championship on 20 points, two ahead of Aston Martin.