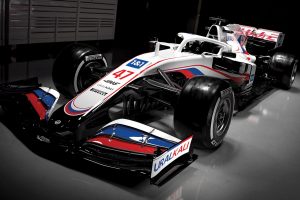 The first team on the grid to admit that nothing has changed but the colour, Haas have revealed their 2021 livery for the VF-21.

While rival teams have been showing off their 2021 revisions, each team handed two tokens to develop the car between the end of last season and the beginning of the 2021 championship, Haas declared their unveiling for Thursday to be a ‘livery unveil’.

And that’s exactly what we were given…

Decked out in the colours of the Russian flag, Haas announced that it has a title sponsor courtesy of Uralkali, the company owned by new signing Nikita Mazepin’s father .

The team will be known as the ‘Uralkali Haas F1 Team’.

“We look forward to representing their brand throughout the season. It’s an exciting time for the team with Uralkali coming onboard and having Nikita Mazepin and Mick Schumacher driving for us.

“It’s definitely a case of all change but I’m hoping that we get back to being in the mix for scoring some points at these races.

“It’s been a tough couple of seasons, but we’ve also got our eye on the bigger picture, in particular 2022 and the implementation of the new regulations.”

Haas team boss Guenther Steiner revealed last month already that the team has opted against spending any of its development tokens, instead opting to focus all their efforts on next year when major rule changes will grip the sport.

There will of course be a few minor tweaks to the 2021 car in light of new rules governing the floor, diffuser and rear brake ducts. That, though, is it for Haas as far as the car is concerned.

The driver line-up, though, is a different story.

This season Haas has two new drivers, not only new to the team but also to Formula 1 although one has a very familiar name.

The team has signed Mick Schumacher, the son of seven-time F1 World Champion Michael Schumacher, as one of its two rookie drivers with the German partnering Mazepin.

21-year-old Schumacher, backed by Ferrari’s junior academy, arrives on the grid fresh from his victory in the 2020 Formula 2 championship, a campaign in which Mazepin was fifth.

Steiner has acknowledged that he is expecting mistakes from his driver pairing as they learn ropes but is convinced this is the way forward for Haas.