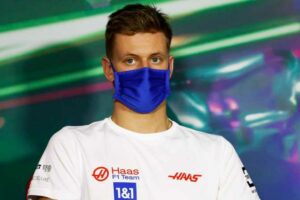 Now that Haas are back in the fight, team boss Guenther Steiner says Mick Schumacher must handle the pressure that goes with that.

2021 was Schumacher’s rookie campaign in Formula 1, though driving a Haas VF-21 that had not and would not be developed, he spent most of the season at the back of the grid with little expectation.

For that season he was alongside another rookie in Nikita Mazepin, but the situation has shifted drastically for 2022.

Haas came out of the blocks as a leading team in the midfield, while Mazepin was replaced by the returning Kevin Magnussen, who had previously spent four seasons with Haas between 2017-2020.

Two rounds in and it has been Magnussen doing the points scoring with P5 and P9 finishes, while Schumacher fortunately walked away from a huge qualifying crash in Saudi Arabia without injury, with car damage ruling him out of that race.

So, the pressure is on now for Schumacher, with Steiner explaining that his driver must cope with it.

“Obviously now the target is set a little bit higher than last year,” Steiner is quoted by Motorsport.com.

“Last year there was no question at all, we contended to be 19th and 20th. Because that was where we were – consistently, by the way.

“So this year, we think it’s a good thing for him [to have more pressure]. Because you have to learn this. I continue to say the higher up you get, the thinner the air gets. So you need to deal with it.

Of course a big crash like that one in Saudi Arabia has the potential to knock Schumacher’s confidence, but Steiner does not expect this to be the case.

To make sure that no confidence is lost for Schumacher, Steiner intends on going through the data with the 23-year-old to determine the cause of the crash, believing it is then important to get Schumacher back in the car.

“We need to talk it through, but I think he needs to do that, because we didn’t drive the car, we need to show what he wants to see,” Steiner explained.

“And I think [we need to] compare the data with Kevin, and I haven’t compared the data. So did he try too hard? I don’t know what it was. Was the tyre not warm enough? We need to find out.

“Then I think just getting back in a car, then you gain this confidence again.”