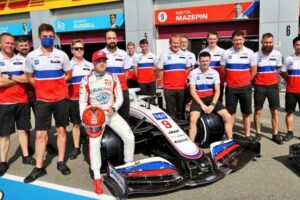 After a point-less 2021 season, staff at the Haas team have received some Christmas cheer – each taking possession of a hamper sent by Nikita Mazepin.

Good news was in short supply for Haas throughout the campaign that has just ended as they continually found themselves at the back of the field and never really looked like opening their account in the Drivers’ and Constructors’ Championships.

Mick Schumacher’s 12th-placed finish in Hungary was as good as it got, while his fellow rookie Mazepin achieved a highest position of 14th at the Azerbaijan Grand Prix – where he annoyed his German colleague with some aggressive defending as they raced for the line.

Mazepin spoke of some team employees leaving for pastures new as the season wore on and in order to try and deter the most valued personnel from upping sticks, the team have introduced a loyalty scheme for next year – when they hope to be back among the midfield as a result of the sport’s new regulations.

In addition, everyone who works at Haas’ bases in the United States, England and Italy has received a Christmas hamper from Mazepin.

Thank you @nikita_mazepin for arranging a Christmas hamper for each member of staff across all of our offices 🇺🇸🇬🇧🇮🇹#HaasF1 pic.twitter.com/JSPFH1cbH2

Whether it contains a throw blanket depicting the face of the 22-year-old, an item which is for sale on selected websites, or a Nikita Maze-spin T-shirt – which celebrates his propensity for off-track moments – is unconfirmed.

But it looks a very nice gesture and you never know, maybe some vodka and caviar is included.

Mazepin himself is recovering having tested positive for COVID-19, which forced him to miss the season-ending Abu Dhabi Grand Prix with his result being returned on the morning of the race.

It was originally reported the Moscow-born driver was asymptomatic, although it was later described as a “mild” illness.