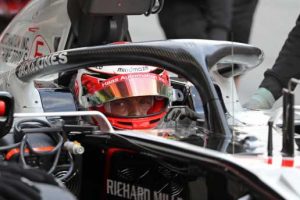 Guenther Steiner has revealed Haas had to choose between a penalty or leaving Kevin Magnussen’s gearbox as it was in Parc Ferme at Imola.

They chose the latter.

Magnussen retired from Sunday’s Emilia Romagna Grand Prix due to a severe headache.

The Danish driver, racing in his final season with Haas, had a upshift problem that materialised in qualifying.

Given that the cars cannot be changed between qualifying and the grand prix, Haas had to choose between a penalty or leaving the problem as it was.

Telling the team that he was “getting a massive headache from these upshifts, it’s like a massive kick in the head every time”, Haas eventually retired Magnussen’s car.

He returns to the garage as a precaution #ImolaGP 🇮🇹 #F1 pic.twitter.com/MQwLWsnSTN

Team boss Steiner revealed Haas had been informed by the race stewards that they would incur a penalty if they changed the gearbox sensors after qualifying.

“But nothing goes our way it looks like at the moment – not just the moment, it’s been a while actually.

“Kevin getting together with Sebastian at turn seven, well that put him in a place where there’s not a lot to do.

“But he caught up pretty well in the end. He then had the gearbox issue which we had since after qualifying, but we were not allowed by the FIA to change the sensors without penalty – so that went against us.”

Magnussen, who had the upshift problem from lap 1, had tried to continue, telling the team that it was his “job” but eventually the headache became too bad.

“It was there from the first lap, I was having slow upshifts,” he explained.

“Not only are they slow, it’s also like a big bang, every time you upshift it seems OK for a couple of laps, and it starts shaking your head crazily.

“By the end of it I just got a massive headache. I told the team, and they were like we have nothing to fight for, so they boxed me.”