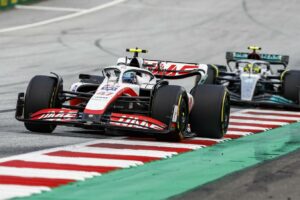 Guenther Steiner has admitted even the Haas drivers are stunned by how fast their cars are when every team except them has been upgrading.

Not one to throw updates onto the car frequently, team principal Steiner has been saving the planned developments until the last race before the summer break which is the Hungarian Grand Prix on July 31.

But over the last few races, while their rivals have been bringing new parts designed to make them quicker, Haas have actually improved with the same VF-22 they have fielded since the start of the campaign.

Although the Canadian Grand Prix ultimately did not fulfil the promise of P5 and P6 grid positions secured in the wet, as Kevin Magnussen and Mick Schumacher endured disappointing races, the latest two rounds have produced excellent results for the American team.

Namely two consecutive double points finishes plus another for Magnussen in the Austrian Grand Prix sprint, with Schumacher having made his long-awaited top-10 breakthrough.

Consequently, Haas are up to seventh in the Constructors’ standings – having failed to score a point at all last season, and only three in 2020.

Steiner said he had always been confident, even during a five-race bad patch between the Miami and Canadian Grands Prix, that they would remain competitive even without the updates pencilled in for Hungary.

“I would say a lot of people are surprised – we knew there was more to come and we therefore said why should we rush to do something,” Steiner told reporters.

“Even the drivers are saying ‘I’d never have believed this car can still qualify sixth and seventh when all the others bring packages’.

“I told them ‘yeah, they bring packages, but you guys don’t know what packages they bring, so how can you judge those packages?’

“We know exactly what we are doing and can just try and do our best. We need to believe in ourselves and we did.

“I think we have proven the car is still strong and there will be a package coming and hopefully it gets even stronger.”

Steiner, when speaking on the F1 Nation podcast, had said he barely dared hope where the team could potentially be with their updated car.

“Can you imagine if we had upgrades where we are?” said the Italian with a laugh.

“I always say upgrades are overrated, in my opinion, and we will bring some in Hungary – hopefully they will work as they should.

“I don’t always follow what the others are doing, you need to go your own way, and we decided in Barcelona not to bring anything just to bring them because it wasn’t good enough.

“We developed more and hopefully, when we bring them in Hungary, they will work.”